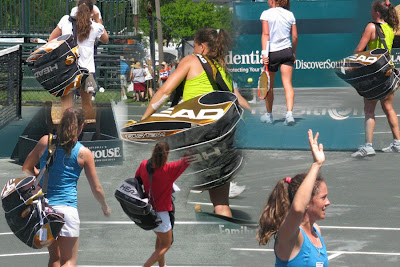 Many years ago, I was in a hotel room--I don't recall where--watching one of the majors. I think it was the U.S. Open. Suddenly, on the television screen, I saw a curly-haired young woman with a looping, lefty forehand. She put a lot of spin on the ball, and her body itself moved in a somewhat looping fashion. She was different from any other tennis player I'd ever seen, and I must have become an instant fan.

Later I would learn about the Schnyder drop shot, and I would watch the unconventionally athletic Swiss player slide vertically on clay from the baseline to the net. When she was good, she was confoundingly good, and when she was off, it was generally because of what was going on inside her head.

Patty Schnyder retired from professional tennis today. For some time now, I've wondered what it would feel like to write that sentence: It feels terrible.  Certainly, it was time for her to leave the tour; her results have not been that good for a while, despite an occasional return to form in this or that tournament. But from the standpoint of a fan, no time is a good time for a favorite player to leave the sport. 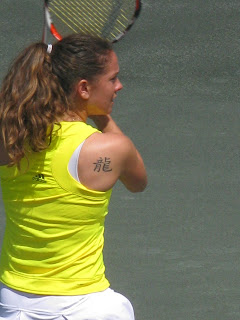 When I think of Patty, I think not only of her unusual and clever (the sports media wore out the word "crafty" in describing her) game, but also of her long history of serving as a representative of the WTA at draw ceremonies, hospital visits, children's clinics, and multiple meet-and-greet sessions. Schnyder clearly enjoyed every aspect of being on the tour, and she spent a lot of time with her fans.

She could be amusing. During a doubles match, I once saw her run to the net post and prop herself against it, arms crossed, waiting for a moonball to land. In that same match, she dragged Corina Morariu by the shirt collar, all the way to the baseline, to prevent her from engaging in a futile argument with the umpire. My funniest memory of Patty, though, was the time she was having difficulty in a match, her coach was nowhere to be seen, so--for an entire set--she yelled at me instead (she won, too). 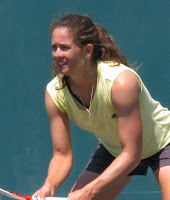 The name Patty Schnyder will forever be linked to Charleston, where she had rock star status. Charleston fans were so enthusiastic about Schnyder that, in 2010, when Caroline Wozniacki defeated her in the third round, the famous Danish player was greeted by brief, lukewarm applause, only to hear the crowd go wild when Schnyder left the court.

In 2002 at the Family Circle Cup, an unseeded Schnyder defeated Amelie Mauresmo, Mary Pierce, Serena Williams, and top seed Jennifer Capriati in what remains her most remarkable run in a tournament. Unfortunately, she lost to Iva Majoli (also unseeded) in the final. In 2006, Schnyder had another great run in Charleston, defeating top seed Justine Henin in the semifinals. Once again, though, she lost in the final, this time to Nadia Petrova.

Schnyder, a 17-year veteran of the tour, played in Charleston for 15 consecutive years. This year was her last, and a farewell ceremony took place during the tournament. The Swiss player, obviously moved by the crowd's feelings for her, said that she has never been one to use phrases like "nothing is impossible," but sometimes, in Charleston, that was the way it felt for her.

On many occasions, when discussing her career, Schnyder stated that she simply didn't have the power to compete against some of the top players. And I have always taken the liberty of disagreeing somewhat with that statement. Though she may have been blown off the court from time to time, Schnyder's problem in so many big matches--including finals and matches she played in majors--was in her head. She did acknowledge having trouble dealing with her emotions on the court, and often--just when she was close to a win--she would make unforced errors. 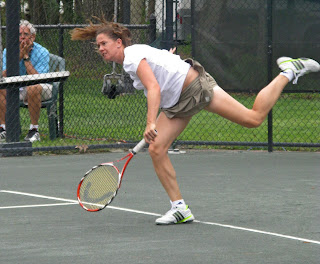 No discussion of Patty Schnyder's career would be complete without mentioning Daniela Hantuchova. Schnyder and Hantuchova participated in the richest rivalry of the last several years, though tennis writers and commentators routinely ignored it. Hantuchova once said that she would rather play anyone than Schnyder. They played each other 19 times, and Schnyder won nine of those matches.

This year's French Open marked Patty Schnyder's 59th appearance in a major tournament. She reached the semifinals of the 2004 Australian Open, and was a six-time quarterfinalist in majors. Schnyder won eleven WTA singles titles and five doubles titles. A long-time  member of the WTA Players' Council, the Swiss player rose to a career-high ranking of number 7 in the world, and she was in the top 10 for 94 weeks. She also represented Switzerland in the Olympic Games on three occasions, and played in 37 Fed Cup ties. This year, her last to participate in Fed Cup, the Swiss star won both of her matches.

"It's overwhelming feelings, and I'm going to need some time," the 32-year-old Schnyder said of her decision to leave pro tennis, which she called "a very emotional" one. Schnyder said she was "...thankful and proud of all the moments I have been able to share on and off the court with fans from all over the world and with the champions and legends from many decades."

There are so many things I'll miss about Patty--her inimitable tennis style, her intellect, her humor, and her sense of realism about both herself and the game. There will never be another like her.
Posted by Diane at 12:11 PM

Fortunate to watch Patty live on a couple of occasions. The Schnyder drop-shot will live long in the memory. Skimming over the net like a wickedly spinning drone. Wonderful "hands" - like she was born with a racquet in her hands and effortless hand/eye co-ordination. Shame Patty couldn't sneak a Grand Slam title during her illustrious career. The stylish patrons at Roland Garros always loved "Patty", "Patty".

We started going to Charleston to see Patty. The highlight for us was 2006 when she beat Justine. The Family Circle Cup won't be the same without her. Bye Patty.

A very evocative tribute, Diane. I hope Patty reads it!