It's not how you play the game, but whether you win or lose

Anyone looking for a handy lesson on how to beat Caroline Wozniacki on red clay certainly could have gotten one from Francesca Schiavone today in Brussels. Only most of the tour's players don't possess Schiavone's amazing variety of shots. Oh, and Schiavone lost. As is too often the case with the Italian, her cleverness and athleticism were neutralized by her propensity to make a high volume of unforced errors.

Schiavone, the 3rd seed in Brussels, hit 44 winners in the 2-hour and 33-minute semifinal match, but she also made 53 unforced errors. Many of those errors were made right after Schiavone set up winners against her opponent. And speaking of winners--Wozniacki hit 20, which is quite a high number for the world number 1. There were nine breaks of serve in the match, which Wozniacki won 6-4, 4-6, 6-3. 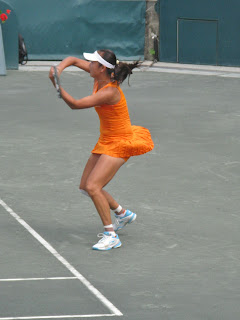 Wozniacki's opponent in the final will be 8th seed Peng Shuai. This is the first time that Peng has reached a Premier level final, and the way she has been playing lately, such a development seemed inevitable. Peng upset 2nd seed Vera Zvonareva 6-3, 6-3 today. She played a remarkably clean match and served extremely well, giving Zvonareva few opportunities to take an offensive stance.

Peng has never won a tournament, a fact that stands out as one of the oddities of the WTA. She reached the semifinals in Charleston last month, but was hampered by fatigue and a very in-form Elena Vesnina. Now she faces the world number 1, and this could be a very good final.

I can only describe Schiavone's brand of tennis as "smile" tennis. A refreshing package guaranteed to, well.. put a smile on your face. Francesca has now lost this fortnight to two players she beat to that memorable RG 2010 title. Did I detect real mental fatique and tiredness in the third set today ? A common problem it seems for some of the top players when "the grinder" is in opposition.

I would be delighted if Schiavone's brand of tennis makes a serious challenge next week, in defense of her title.

Schiavone has been tired for a while. She played tournaments she was too tired to play. I hope she gets a big energy rush for Paris. She has her work cut out for her.