Hantuchova sends Wozniacki out of Paris 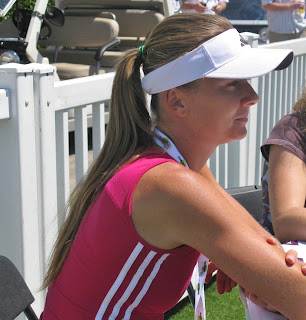 There are a couple of things that have given Daniela Hantuchova trouble throughout her career--playing on clay, and keeping her head together when she's winning. Lately, her clay performance has improved so much that I believed she would be competitive in Paris. The other part, however, I wasn't too sure about. But when keeping her head together meant a whole lot today, she carried off the task beautifully, and--in doing so--dismissed top seed Caroline Wozniacki from the French Open.

It wasn't a difficult match for Hantuchova; she allowed the world number 1 to win only four games. Hantuchova had first and second serve percentages of 76 and 61, she won at the net in seven of nine approaches, and she hit more than three times as many winners as Wozniacki. In an hour and 13 minutes, it was over, and Hantuchova--the very essence of sangfroid--had won, 6-1, 6-3.

Hantuchova performed at this level on clay (albeit green clay) last year when she took Jelena Jankovic out of the quarterfinals in Charleston. When she hits her groundstrokes consistently, she hits up and down both lines, and she's hard to beat, especially given her skills at the net. Hantuchova can hit hard and soft, and we saw both today, as she prevented Wozniacki from developing any kind of consistent rhythm.

Wozniacki does require a consistent rhythm, and when she doesn't get it, she can lose her way. Expectations that she would win the French Open were held by some; yet if Wozniacki lacked aggression in Paris, what will she do at Wimbledon, playing on faster courts? She insists there is "no pressure," but the fact of the matter is that she does not perform at the same level in majors as she does in some other events. In some form or other, that has to be a partly mental phenomenon.

Wozniacki, we heard a few weeks ago, is supposed to start working a bit with Martina Navratilova. Not that anyone has asked for my advice--but I think the player who could most benefit from working with Navratilova is Sam Stosur. Stosur has a lot going for her, but needs to overcome her discomfort with moving forward. (Piotr Wozniacki, by the way, made a point of saying that he and Caroline would have to pay for Navratilova's consultation "out of our own pockets" and that Navratilova's services were not inexpensive--sorry, I'm just not feeling the indignation.)

Still hanging around, I should mention, is 6th seed Li Na, who has never before done especially well on clay courts. And 2009 champion Svetlana Kuznetsova, who is always unpredictable, is also still going strong in Paris.
Posted by Diane at 6:00 PM

At this rate Serena Williams could come out and win the darned thing. it is that open at this year's FO and I for one am enjoying the upsets.

Stosur's problem is not in her inability to move forward, it is her inability to actually come up with a game plan when Plan A is not working. She relies on her serve and her forehand, 2 aspects of her game that have become predictable. It worked well when she was the hunter. She is now the hunted, and now she needs something new. Players know where the serve is going and as we saw in Rome and in previous tournaments, if you can return the serve and play to her backhand, you have her beat.

In addition, she is an accomplished doubles player. That should count for something

I believe, in a way, we're saying the same thing. Stosur could be more creative--have more choices--if she would come forward more than she does. With all her doubles experience, she could certainly do it. She ties herself down, yes, with reliance on serve/forehand.

This is a fascinating time for women's tennis. There simply is not a dominant player, other than Serena or Kim, sort of, when one or the other is healthy and/or playing. And each is in the latter part of her career.

Despite her ranking, Caro simply has not stepped up. Perhaps she will, perhaps not.

Paradoxically, it's fun to watch the numerous outstanding players on the tour battle it out, round after round, tournament after tournament, many with a solid chance to win any given event, including Roland Garros.