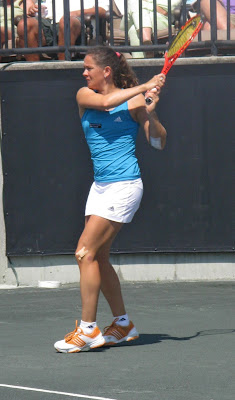 Patty Schnyder beat her long-time rival, Daniela Hantuchova, for the first time in five years today at the Generali Ladies Linz. The unseeded Schnyder went down a break in the first set, but came back to take it 6-4. At 3-all in the second set, Hantuchova went down 0-40, but she managed to win the game. Schnyder broke at 4-all, however. In the second set, Schynder didn't seem as sure of herself, but after winning a very long game, she was able to pull some errors out of the 2nd seed and to break her at 4-all. When she served for the match, Schnyder--not atypically--became nervous, and she went down 0-30 right away. Once again, though, she steadied herself, and won the quarterfinal match 6-4, 6-4 on her first match point.

7th Ana Ivanovic won her quarterfinal match against Julia Goerges. The first set was close, and Ivanovic won it in a tiebreak. She then relied on her serve to take the second set 6-2. Of all the players who have had service problems, Ivanovic is the only one who has returned to form.

She may have her hands full in the semifinals, however. She will play Roberta Vinci, whose so-called "old school" (I call it clever and interesting tennis) game gave her a 5-7, 6-3, 6-4 win over countrywoman and doubles partner Sara Errani. Errani was seeded 9th.

The chap is completely right, and there's no skepticism.