Li and Pennetta beaten in Moscow 1st round

Li Na, whose WTA Championships status hangs in the balance, didn't help her cause today by losing in the first round of the Kremlin Cup. Li was defeated 6-4, 6-2 by Anna Chakvetadze, who said she thought Li might have been a bit stressed about the Championships, and Li agreed. Li is still in the running to go to Doha, but her first round loss today lowers her chance. She had a wild card into Moscow, and was also seeded third.

Moscow is traditionally a place with a big home court advantage, and it wasn't just Chakvetadze who came through. The quite talented, but sometimes shaky, Elena Vesnina upset 5th seed Flavia Pennetta 6-4, 2-6, 6-2. 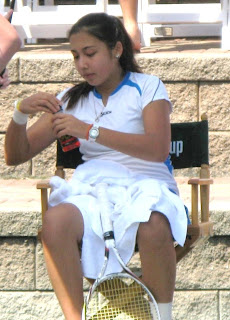 The other victory of note was the defeat of Gisela Dulko by qualifier Zarina Diyas. I have seen Diyas play on clay, and though I've tried, I can't think of a more aggressive tour player. Diyas runs to the net and hits every type of volley in circumstances when other players would wait for the bounce. I was impressed when I saw her play because of her willingness to keep going forward.

In doubles, the streaky Bondarenko sisters were defeated 6-4, 3-6, 10-4 by Algul Amanmuradova and Darya Kustova.