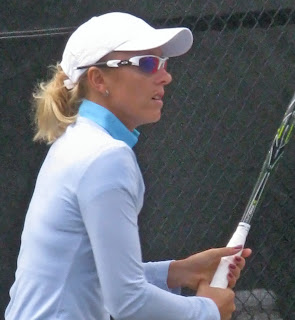 The match began with five breaks of serve. With each player taking a set, Mirza served at 2-1 in the third, but was broken. Rodionova served for the match at 5-3, but Mirza broke her. Mirza then saved a match point on her own serve. The set eventually went to a tiebreak, and Rodionova won on her fourth match point, when Mirza double-faulted.

Rodionova had to play against the crowd, which not only cheered wildly for Mirza, but which also enthusiastically cheered Rodionova's errors, and did not applaud her winners. All of Mirza'a matches in Delhi have been very noisy affairs.
Posted by Diane at 10:31 AM