Always down a set and a break--forever cherished by fans 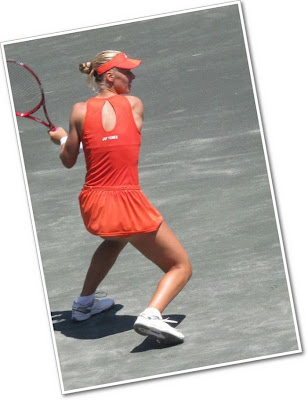 Elena Dementieva, one of a group of Russians who significantly changed women's tennis, retired today. The 29-year-old Dementieva was one of the best athletes on the tour, and--I think it is safe to say--a universal fan favorite. Her athletic grace, intelligence, humility, and sense of humor made her stand out for years, and some of her heartbreaking losses caused so many of us to identify with her and feel for her.

But Dementieva's career, in the end, was not about loss. While it's true that she may have under-achieved (which could also be said of so many of her peers), she nevertheless compiled an outstanding record on the tour. Dementieva was ranked in the top 20 for seven years, and was in the top ten for a total of 328 weeks; she reached a career-high rank of number 3 in the world last year. She finished in the top five at the end of both 2007 and 2008.

Elena Dementieva won 16 singles titles and was a singles runner-up 16 times. Her titles included wins in Dubai, Moscow, Tokyo, and Los Angeles. Dementieva also won six doubles titles, including the 2002 WTAChampionships, with partner Janette Husarova. She reached another seven doubles finals, including two at the U.S. Open.In 2000, Dementieva won the silver medal at the Olympic Games in Sydney. In 2010, she won gold at the Beijing Olympic Games, an achievement she considered the greatest of her career.

Dementieva was also an eight-time member of Russia's very successful Fed Cup team. She was the runner-up at the 2004 French Open, in which she lost to countrywoman Anastasia Myskina, and also at the 2004 U.S. Open, in which she lost to countrywoman Svetlana Kuznetsova. Dementieva reached the semifinals of seven other majors. One of her most exciting matches--and one of the best matches in recent history--occurred at the 2009 Wimbledon tournament, when Serena Williams defeated her 6-7, 7-5, 8-6. 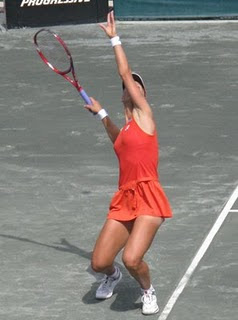 Several years ago, Dementieva began to have a significant problem with her serve. Most careful tennis observers agreed that the problem began after she recovered from an injury and did not know how to stop compensating for a weak shoulder. Later, she was said to serve expertly during practice, leading fans and tennis experts to conclude that the over-compensation eventually became a mental issue. Dementieva didn't seem to let the problem bother her; rather, she became an expert at breaking her opponents' serves. She eventually overcame the service problem, though--toward the end of her career--she adopted an unusual service motion.

Last year, Dementieva lost to Samantha Stosur in the third round of the French Open. Asked whether this was one of her biggest disappointments, she replied, in her typically droll way: "I had so many."

Dementieva had to retire in her semifinal match at the 2010 French Open because of a left calf strain. She missed Wimbledon because of the injury, then made it to the round of 16 at the U.S. Open. There, she again played Stosur in what turned out to be the most dramatic singles match of the tournament. Dementieva held four match points, but it was Stosur who advanced to the quarterfinals.

Two days ago, the Russian beat Stosur 4-6, 6-4, 7-6 in round-robin play at the WTA Championships in Doha. Today, she lost in Doha to Francesca Schiavone, and after the match, she announced her retirement.

A couple of days ago, an interviewer in Doha noted, after Dementieva's victory over Stosur, that she had been down a set and a break. "I'm always down a set and a break," the Russian replied. Indeed, for many years, Dementieva was stunning in multiple three-set victories. But in the latter part of her career, going three sets became difficult for her. The difficulty was obviously not a physical one for the exceptionally fit Russian; she just began to lose her focus.

For her entire career, Dementieva was coached by her mother, Vera, whose existence in the stands often appeared to be poised on an emotional roller coaster. Dementieva said more than once that it was harder for her mother to endure her dramatic matches than it was for her to compete in them. Dementieva could crumble on the brink of victory, and she could also overcome defeat at the last moment. Her wins were sensational, and her losses were often gut-wrenching. Though she was calm and poised off-court--on the court, she tended to thrive on tension, and to create drama.

Women's tennis won't be the same without Elena Dementieva. She was a joy to watch as she repeatedly hit expertly from the baseline, and as she moved rapidly and gracefully with such stunning athleticism that she often made very difficult points look easy. Dementieva was always quick to laugh at herself, gracious toward her opponents, and very warm toward fans. Her screams of frustration and her animated facial expressions were endearing, and all the more so because they were so spontaneous.

How fortunate we were to be able to watch her for so many years.
Posted by Diane at 11:54 PM

In her post-match interview the other day, it was noted how exceptional it was how many times she'd played in the year-ending championships. She laughed, and said something about it also showing "how old I am."

I guess she sort of foreshadowed her announcement the next day with that.

Thanks for a great tribute Diane. I will miss Elena. Followed her since 2000 Sydney. I read another article that said she knew she was retiring at the beginning of the season. She also said that she really wanted to win the French Open and would give it one last try. Tearing her calf must have been horrible for her. Her last year has been a real up and down year but she remained her kind self. In her interview, she said she wanted to leave tennis while she still had passion for it. I think that is a great attitude.
She will be sorely missed on the tour.

Todd, she has mentioned being "old" a few times this year. I wasn't surprised that she retired.

Always loved Elena! Sorry to see her go, but love the way she did it. As usual.