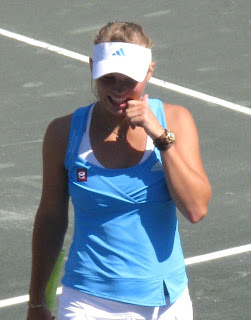 If ever there were a case for "last woman standing," Caroline Wozniacki has made it. With her third round win at the China Open, the young woman known as both the Great Dane and the Golden Retriever--but best known by her non-canine nickname of Sunshine--is now ranked as the number 1 player in the world. Wozniacki, who doesn't hit many winners, but who plays stunning defensive tennis, has worked very hard and played very hard. Some say she has over-played, but--so far--there doesn't seem to be any particular damage done. Her fitness is excellent, and it's obvious that she has fine-tuned her game during the past year.

While former world number 1 Serena Williams was walking around Miami in an orthopedic boot because of shards of glass that cut her foot tendon, Wozniacki was playing, and winning a lot; she has already won five titles this season. Venus Williams, Maria Sharapova, Justine Henin, and Agnieszka Radwanska are done for the season. Serena is coming back soon, but hasn't played in a while. Former top players Dinara Safina and Jelena Jankovic currently look like shadows of their formers tennis selves. (Jankovic's story is especially frustrating: She did all the right things--finally improving her serve and impressively increasing her aggression--but after going through some personal crises--hasn't been the same.) Elena Dementieva seems to have lost her ability to close matches. Sam Stosur's brief glory is fading before our eyes. And then there's Victoria Azarenka, whose physical fragility has been her undoing.

There is also Maria Sharapova, from whom we have seen flashes of her pre-surgery self, but who sometimes appears lost on the same courts where she used to look totally in command.

Wozniacki, of course, isn't quite the "last" woman standing. Three other players--Vera Zvonareva, Francesca Schiavone and Kim Clijsters--have re-defined their careers in the last several months, and are now among the elite on the tour. Clijsters and Schiavone have won majors; Wozniacki and Zvonareva have come close. And it's only a matter of time before Williams gets back into the groove.

Williams, Clijsters, Wozniacki, Zvonareva, Schiavone. One of them will probably win the WTA Championships. But what happens after that? Will Wozniacki finally win a major, or will she succumb to the same world number 1 pressure that appears to have weakened the confidence of both Safina and Jankovic? It would be nice to see both Safina and Jankovic find their way back, but we cannot count on that. And with the exception of Wozniacki, no one appears to be standing in the wings, ready to jump onto the big stage.

There are other questions that will not be answered until 2011: Can someone help Victoria Azarenka become less physically vulnerable? Will Anastasia Pavlyuchenkova improve her fitness, get over her service troubles, and become a top 10 player? How much more wear and tear can Venus Williams' knee take? What can we expect from Justine Henin when the new season begins?

Considering how the order of things changed this year, it is probably futile to make predictions about 2011.
Posted by Diane at 10:35 PM

I don't think Wozniacki will feel the "World No. 1" pressure the way that Safina did - Wozniacki seems stronger mentally - but she's so defensive in her play I don't think she'll win a major any time soon either. Defense does not win championships in tennis.

Cliff Drysdale said this season that he thinks Caroline will win 4 majors in her career. Mary Jo Fernandez literally laughed out loud in response. I hope he's right but worry she is.

I like Wozniacki, if she wins a major or two that would be great, but I don't think she will. When she starts beating women like Serena,Kim,Venus,Justine on a regular basics I give her a good chance. Wozniacki is good, But she'll probaly end up like Elena, great tennis player w/o a major!