Only one player can get the treat this Halloween 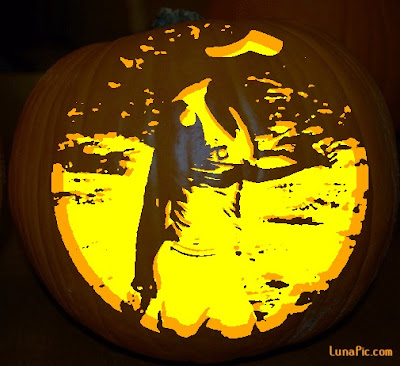 How much pressure is Caroline Wozniacki under to win the WTA Championships? Like Dinara Safina and Jelena Jankovic before her, the Dane has reached the number 1 ranking without winning a major. She has every opportunity to win one in 2011, but it would also be a nice year-end treat if she would win in Doha. One thinks back to 2005, when Amelie Mauresmo won the Championships and it changed her career. Not that Wozniacki is like Mauresmo was in the mental department, but--no matter what she says--it is inevitable that Wozniacki is going to feel the pressure.

Here is where the trick part comes in: Wozniacki's opponent tomorrow is Kim Clijsters, 2009 and 2010 U.S. Open champion, and a very big threat on hard courts. There is no pressure on Clijsters. She is currently number 4 in the world, which is a very nice number if you are in the midst of your second WTA Tour career (and a very good one under just about any circumstance).

Wozniacki recently received her world number 1 trophy, but there can be no doubt that she would like to leave Doha with more than one prize in her treat bag. Clijsters can go off her game now and then, but if she stays in form tomorrow, Wozniacki will need to have a few tricks handy.
Posted by Diane at 5:29 PM

Nice post. It was an intense match! Congrats to Clijsters for the win!

Diane, have you seen this article on tennis.com. Makes for very interesting reading.

Karen, I hadn't seen that (I've been traveling, and have missed a lot). Thanks for directing me to it. To allow cheating as a solution to cheating certainly has become popular, hasn't it?

Oh yes it has. I get the feeling that something big is about to erupt in our sport and I am not quite sure whether we are ready for it or not.

I do believe that the sport needs some amount of cleaning up. The tennis writers are not doing their jobs as they have too many hands in too many pies and some of them are too close to the players to remain objective.

Country above sport seems to be the mantra these days. Cycling has had its face pushed to the limit with the positive drug test of Contadaor and to date I am yet to see anyone call Lance Armstrong to task about the allegations being made by his compatriot, Floyd Landis. One wonders whether Landis was the whistleblower because he got caught or some such.

Perhaps Rochus will prove to be the whistle blower in a sport that really and truly needs cleaning up.

The allegations about Armstrong have been around for years and years.

What gets me is that players who have done nothing wrong whatsoever (like that ridiculous incident with Kuznetsova), or whose "crime" is questionable insofar as performance enhancement goes, get called out quickly enough. Sometimes, it seems like someone just throws a dart at photos or something. But what about the ones who really do use performance-enhancing substances?

Exactly. They look at a player's physique and say, look PEDs. They look at a serving display which has been there since the player joined the Tour and put that down to PED use. I wish there was a drug that I could use that would make me serve better. I really do. I double fault more on a tennis court and catch ball tosses more than I would like.

I also wish there was a drug that would allow me to hit a decent looking backhand, but there is not. So, it is always surprising to me when I hear people talk about so and so is on drugs just because they are actually able to keep the ball in the court with their serve. Ugh.

Kim is a great player. She could have a massive year in 2011.

I'm not sure, Andy, but I think it was Tom Perrotta who said that in their second careers, Clijsters would dominate Henin in every way. So far, he's been right on target.