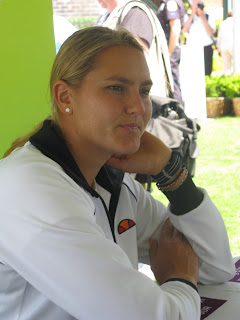 Official 2012 Radwanska-slayer Nadia Petrova won the Toray Pan Pacific Open in Tokyo today, defeating defending champion Agnieszka Radwanska 6-0, 1-6, 6-3. The Russian pulled this off the hard way, too, entering the tournament with a back injury bad enough to cause her to withdraw from play in Seoul last week.

Twice in Tokyo, Petrova looked done. She had to play for over three hours against Petra Martic in the third round, and she came from a set and 1-4 down to beat Sara Errani in the quarterfinals. In the course of the event, Petrova beat three top ten players--Errani, Radwanska, and Samantha Stosur (in the semifinals).

In the first set of the final. Petrova hit 16 winners and made only three unforced errors. Anyone who has followed her career (and that of Radwanska) knew, however, that the second set would be different. It was. Radwanska significantly raised the level of her serve, and Petrova began making a number of unforced errors. Serving for the set at 5-1, the defending champion seemingly effortlessly reeled off three aces in a row.

The third set, as expected, was much closer. At 3-all, however, Radwanska blinked. The 3rd seed double-faulted twice in the seventh game, and was broken. Petrova smoothly served for the match, which gave her her second tournament win for 2012. Her other victory this year was in 's-Hertogenbosch, and there, she beat none other than Urszula Radwanska in the final.

Radwanska committed only three double-faults in the entire match, but two came at such a crucial time, they more or less decided her fate.

Contrary to what Tennis TV broadcast over and over, this is not Petrova's first premier-level title. She won both Charleston and Berlin in 2006.

The unseeded team of Raquel Kops-Jones and Abigail Spears won the doubles title. They defeated 4th seeds Anna-Lena Groenefeld and Kveta Peschke 6-1, 6-4 in the final.
Posted by Diane at 10:51 AM

I suspect Nadia is going to wake up to find a crushed melon at the foot of her bed.

Yeah, I was thinking this mornng--you know It's coming after her now!

Aga's near-tears moment during the post-match ceremony was a bit surprising. But, then I wondered if it was a way to lull Nadia into a false sense of security. ;)