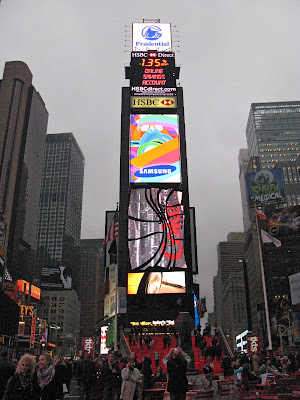 Here, in ascending order, are my top 10 U.S. Open happenings:

10. How to play the wild card: Samantha Crawford got a wild card into the U.S. Open junior tournament by applying for it. She was a virtual unknown, and the hopes of the USA lay in top seed Taylor Townsend and crowd favorite Vicky Duval. But Crawford (who had a bit of luck when she got a quarterfinal walkover from the 2nd seed) prevailed, winning the final in straight sets.

9. It's raining, it's pouring, this waiting is boring: Once again, rain played a role in the U.S. Open. Perhaps the most blessed by the weather (though I don't think the rain played as great a role as others do) was Maria Sharapova, who was getting trounced by Marion Bartoli before the rain came. It rained on and off for a few days, sometimes causing players to make tunnel walks back and forth as showers came and went.

8. Good thing they aren't triplets: Ekaterina Makarova and Bruno Soares won the mixed doubles title, and--in doing so--they took out both Bryan Brothers. Makarova and Soares signed up to play in the event around thirty seconds before the deadline.

7. Pardon?: First she took out Kim Clijsters, then young Brit Laura Robson--just for good measure--took out Li Na, who was expected to be a major contender for the title this year. In beating Clijsters, Robson delivered the Belgian her very last professional singles match. The big-serving left-hander was finally stopped by defending champion Sam Stosur, but she was also stopped by a sudden case of nerves. It wasn't a quiet farewell, though: Robson made Stosur play nine match points.

6. I put a spell on you: One tennis writer suggested that Marion Bartoli was "possessed" during the latter part of her match against Petra Kvitova. It looked like it. The Frenchwoman won only one game in the first set, but with Kvitova, there's always a decent chance of taking the second set (and especially when she's just played multiple consecutive matches in three hard court events) from her after she has played almost flawlessly. Indeed, the Czech player won only two games in an error-filled second set. It was the third set that really got our attention: Bartoli--swinging wildly, yelling, jumping, fist-pumping, and generally going over the top in every way--won every game of the final set. Some people don't like the Bartoli Show, and I understand that. But for sheer entertainment, it was hard to beat.

5. Farewell--too soon: Three-time U.S. Open champion Kim Clijsters went out in the second round, which abruptly ended her singles career, once and for all. She stayed on to play doubles and mixed doubles, and to chat and banter with fans and the with the sports press. Clijsters' leave-taking was gentle and under-stated, and was a more than fitting ending to a very celebrated career.

4. You again?: World number 1 Victoria Azarenka came from a set and a break down to beat Maria Sharapova in the semifinals. The match was a test of wills, as well as a test of tennis and a test of fitness. It was very hot, and the hitting was very hard. A lot was at stake: Sharapova had struggled in New York since her triumphant 2006 U.S. Open win, Azarenka was trying to reach another major final. In Australia, she had practically beaten the Russian star down in the final. This was WTA drama at its finest, and it was the world number 1 who advanced, 3-6, 6-2, 6-4.

3. Ciao!: Agnieszka Radwanska was the second seed. Angelique Kerber was considered a contender to reach the final. But the Italians didn't get the memo, or at least they didn't bother to read it. In the round of 16, Roberta Vinci defeated Radwanska in straight sets, and her best friend and doubles partner, Sara Errani, took care of Kerber, also in straight sets. Errani and Vinci then had to play each other, and that was a somber affair. Errani won, but was no match for Serena Williams in the semifinals. But it was a wonderful tournament for the Fighting Italians....

2. We're number 1!: They won the 2012 French Open, and they won the 2012 U.S. Open. Errani and Vinci, the hottest team of the season (they've now won eight titles), had to play the final against the team to whom they had lost at Wimbledon and in Cincinnati. Non c'e problema! The Italian pair won in straight sets, and as of today, Errani is the world number 1 doubles player; Vinci is ranked number 2.

1. A New York state of mind: The woman whom Petra Kvitova unintentionally, but oh-so-appropriately, called "The Serena" a couple of years ago, has now won 15 major singles titles. Yesterday, Williams came from a break down in the third set to defeat world number 1 Victoria Azarenka. It was an unusually good final, in which Azarenka served for the championship. Under other circumstances, she would probably have wound up holding the trophy; Azarenka has turned out to be a pretty tough customer. But when you're facing The Serena at such a big moment, fortune has a way of slipping through your sweaty fingers. This is Williams' fourth U.S. Open title, and one that she will surely always look back on as a triumph over many forms of adversity.
Posted by Diane at 10:18 PM

Serena had trouble believing that she had won the match. Tennis is like this some days.

Typo--I found two of them and somehow missed that one. Thanks. Late-night typing.....

Diane Clijster lost in second round this year, not first round

That is some really bad proof-reading!

I'm surprised the men's final had that many viewers, considering the postponement. I missed the first couple of sets, then came home to discover our CBS affiliate wasn't showing it. I watched it online, and then some time later, it did pop up on television.