Esther Vergeer has reached the semifinals of the Paralympic Games in London. She did so by winning her 468th consecutive match.

Serena Williams is a finalist for the Women's Sports Foundation's Sportswoman of the Year (in individual sports) award for 2012. There are still a few days left for voting.

Net cord tension is measured at the U.S. Open.

Mats Wilander says that Laura Robson will win a major. 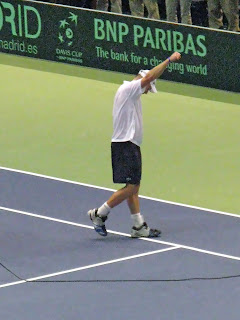 Women Who Serve sends best wishes to Andy Roddick, who played his last professional tennis match tonight in Flushing Meadows. Roddick, in addition to being an outstanding tennis player and an outspoken and sharp-witted character, is a long-time friend of the WTA.
Posted by Diane at 8:25 PM