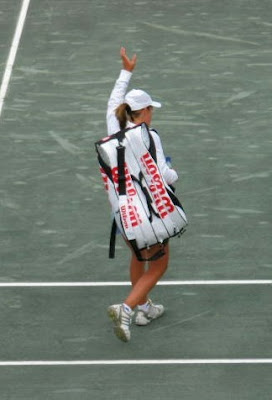 About a week ago, I asked "What gives with Henin?" Today I am here to ask the same thing. Henin retired, effective immediately, from professional tennis today, only a couple of weeks before the start of the French Open, and without winning a career Grand Slam. She has left the tour, she said, because "I was at the end of the road," meaning it was just time for her to move on.

Only that sentiment does not really jive with what we know about Justine Henin--that she is one of the most driven people in pro tennis, maybe in all of pro sports. A likely fifth French Open title was days away, and the elusive Wimbledon title seemed to be less elusive than ever.

On the other hand, it may be her very driven nature that caused her to believe she could not go on another day. It is generally acknowledged that it was most likely over-training led to a compromised immune system that, in turn, led to Henin's contracting the terrible virus that kept her off of the tour for so long. In other words, she has paid before for over-doing it.

But then again, Henin learned from her time off. She monitored her immune system closely, and tended to her injuries wisely. She played as few tournaments as possible, and did everything she could to protect her health.

So why quit now? Henin has been a slump, despite having had a glorious 2007. Perhaps she thought--like many of us thought--that she was no longer a shoo-in at Roland Garros, and she did not want to face the possibility of experiencing a decline on red clay. Or perhaps she worked so hard for so long that she was exhausted, mentally and physically, and just wanted out. "I have been driving my career based on an emotion but I didn't feel that emotion anymore..." she said in her announcement.

When female champions retire these days, it is not without controversy or sexist babble. Henin's countrywoman, Kim Clijsters, said her body was so battered she could hardly stand up in the morning, and it took her hours to go through healing and conditioning rituals. She then became pregnant and retired a few months shy of when she had planned to retire, anyway. And she was mercilessly bashed by some who thought it somehow uppity of her to not want to compete when she was in constant pain. On the other side of the vicious coin, there have been a few articles written recently that proclaim how wonderful it is for female athletes to be able (who was stopping them?) to walk away from all that sweat and fame so they can get on with the real job of all women--starting a family.

More on Henin later in this blog. But for now--it seems fitting that she would be the first player to retire while she was still number one in the world. Justine is just not the losing type.
Posted by Diane at 1:45 PM