What gives with Henin? 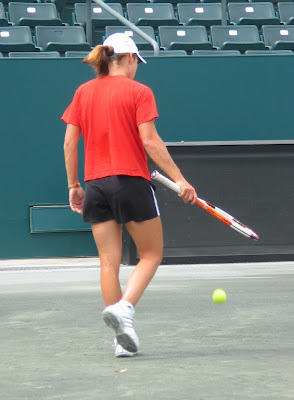 Though falling to a steadily improving Dinara Safina is far from shameful, Justine Henin's defeat in Berlin today is but part of a pattern of sub-standard (for her) tennis we have seen this season. Tennis.com calls the situation "a growing Henigma," and perhaps it is.

Last year was the year of Henin. She won the French Open and the U.S. Open, and she won ten of the fourteen tournaments she entered. She finished the year as number one in the world, and was pretty much blowing most of her competitors off the court.

Much has been made of Henin's personal life and how it may have affected her--both positively and negatively--on the tennis court. She skipped the 2007 Australian Open because of her divorce proceedings, and she announced later in the year that she had been reconciled with her family (a matter about which I remain suspect).

More important, I believe, is Henin's sometimes-fragile physical state. She missed most of 2004 because of a debilitating virus, which many suspect was brought on by over-training. Henin then changed her training regimen and began to play fewer tournaments. These were wise decisions.

One thing that tennis writers and commentators do not seem to have noticed is that Henin's serving problems began after the long virus layoff, and she has not been able to solve them. Most of the time, she can get by if she loses her serve because she has so many other skills. But this problem may be catching up with her now that other players are getting better at figuring out her game.

Henin has also been having trouble with her right knee, and she has complained for some time of respiratory issues--both infections and asthmatic bronchitis.

Then there is the confidence issue. Henin is accustomed to dominating, not being dominated. In last year's U.S. Open, she played a 6-0 set in each match all the way through the round of 16. But in this year's Australian Open, Maria Sharapova beat her in the quarterfinals, 6-4, 6-0. In March, she was beaten 6-2, 6-0 by Serena Williams in the quarterfinals of the Sony Ericsson Open. These are serious defeats in serious tournaments, delivered by very serious competitors.

Carlos Rodriguez has been Henin's coach for years, and there is no reason to believe that he should stop being her coach. But perhaps it is time to bring in an ad hoc coach--one who will stay for a brief, designated period of time, and help Henin with the parts of her game that are troubling her. Rodriguez obviously does an outstanding job, but maybe, right now, he is too close to the screen to see the picture.

Justine Henin is a superior athlete, both physically and mentally. Even those who are not particular fans of hers must admit that it is a joy to observe her fluidity of movement, her uncanny anticipation and her now-legendary backhand. If she is not physically healthy enough to play great tennis, one hopes she can find the right medical help. And if physical problems are not the main cause of her slump, then one hopes she will find the right coaching or psychological help. Something is wrong with Henin, and that something is hurting women's tennis.
Posted by Diane at 2:48 PM

I think she's tired (of tennis) Diane. A couple of interviews she's given lately seem to hint at the desire to fill in a more complete picture in her life as a woman. I would put "as a woman" in quotes if I could find the link -- I read an interview before her loss (where she discussed motivation) and therefore wasn't too surprised with the Safina result.

I read one of those interviews, too, and frankly, it just sounded to me like the typical stuff that Henin says every once in a while, and I didn't make too much of it. Perhaps I should have.

I think Henin is an ultra-sensitive person who sometimes implodes because she doesn't have the makeup to explode.

I do agree, however, that she's tired. And I think the theory that she was vulnerable to that virus because of over-training is a sound theory. Henin is driven (that's not a criticism), and it catches up with her from time to time.

The question is: Will she drive herself some more or give it up? I can't see Henin letting herself slide down the rankings. She's either going to be at a top level or gone. And though I am not a particular fan of hers on an emotional level, I think she is an enormous talent, and I hope she sticks around.