Williams and Krajicek entertain in round three 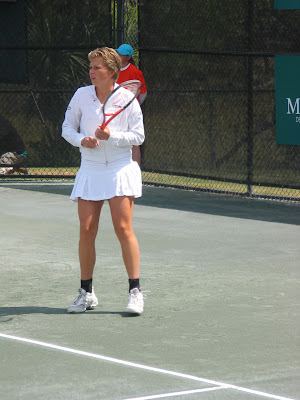 Michaella Krajicek streaked through the rankings like lightning, then stalled; her talent is undeniable

Michaella Krajicek is very talented and can play some exciting tennis, but she has trouble stringing together a set of victories. In Rome, she kept up with Serena Williams quite well in the first set, then wilted in the second. Today in Paris, she not only kept up, but put on a thrilling display of ball-striking and volleying in her third round match with Williams. She wilted for two games in the second set, but then pulled herself together. It wasn't enough to beat an in-form Williams, but it was enough to show people just what kind of tennis she can play.

It was a very entertaining match, with lots of shifts of momentum; in the first set, Williams won three games, then Krajicek won three, then Williams won three. There was also a lot of mad volleying at the net, some cracking up, and a great deal of screaming from Krajicek, who likes to yell at herself. The commentators thought she was yelling in Czech, but--as Pam Shriver noted--being Dutch, Krajicek can probably yell at herself in six languages.
Posted by Diane at 8:18 PM