Schnyder exits in dramatic round of 16 match 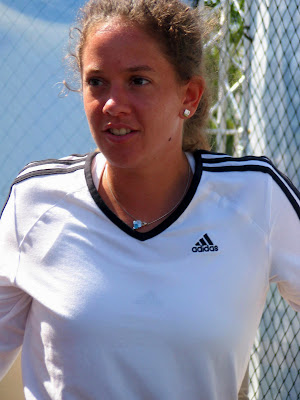 Swiss star Patty Schnyder served for the match three times today against Maria Sharapova, but could not win it


The only time Patty Schnyder had ever beat Maria Sharapova was on clay in Rome in 2005. With Schnyder playing extremely well lately and Sharapova still with a bad shoulder inhibiting her serve, there was every reason to think that Schnyder would prevail in their round of 16 match today at the French Open.

And prevail she did in the first set, taking easy advantage of Sharapova's vunlnerability on clay courts, and winning it 6-3. Sharavpova stepped it up in the second set, though, and took it 6-3, also.

The third set is one for the books. At all of the Grand Slams except for the U.S. Open, there is no third set tiebreak (or fifth set tiebreak, for the men)--players simply keep playing until someone wins by two games. When, after thirteen games had been played and there had been nine breaks of serve, it was hard to keep watching. On the one hand, the longer it went, the worse Sharapova would feel physically, but it was also more likely that Schnyder, a head case from way back, would start to fold.

Patty Schnyder is one of my very favorite players on the tour, but it isn't easy, being her fan. Some people say that she has not advanced more in her career because she is not a power player. And while it is true that she is not a power player, she has become very physically fit, is stronger than she looks, and is serving at between 114 and 120 mph. consistently. Some say she has not advanced farther because she does not have enough weapons. Again, I disagree. Schnyder is a lefty, which gives her an advantage, both her first and second serves are good, she has extremely good court sense (a fact Radio Roland Garros commentator Sandra Harwitt does not know, for some reason), she possesses a large variety of shots, and her forehand can be lethal. I confess to not being a tennis expert, but I have been watching tennis for a long, long time, and I do not think that Schnyder is short on weapons, despite the fact that she would, of course, be vulnerable to big power players like Serena Williams, and super-athletes like Svetlana Kuznetsova.

Schnyder's game is not very good on grass, and it is especially good on clay because of her tendency to loop, lob and slice the ball. Her backhand has always been her weakness, but most top players have weaknesses. Schnyder's problem is that she does not have a true winner's mentality. Last year in Charleston, when she was interviewed after a night match, she came right out and said "I have trouble with my feellings, my emotions."

It is a pity that a clay court player of Schynder's superiority has gotten to the quarterfinals of the French Open only once in her career, and it is a pity that--as many times as she has been a Tier I tournament finalist--she does not have a long string of Tier I wins.

Today, Schnyder served for the match three times (once at 5-4) and could not close. At the end, when she was down 7-8, she went up 40-15, and I breathed a sigh of relief. But she was quickly broken by Sharapova, and it was over.

Sharapova applauded Schnyder when she left the court, and indeed, both women played their hearts out. I take nothing away from Sharapova, who is a fighter to the last point. But really, this was Schnyder's match to lose, and lose it she did. The Swiss star is twenty-eight years old; to think of what she could have done is heartbreaking for me, and probably for all of her fans.
Posted by Diane at 3:14 PM

I didn't get to see the match unfortunately. I heard, though, that Sharapova went to get a new racquet at a pivotal point during the final game even though hers was not broken. Henin also did this--get a new racquet mid-game--earlier in the tournament. Is this the new form of stalling since injury timeouts have come under heavy criticism?

With Sharapova, it's a standard form. If she's in mild trouble, she gets a new racquet. If she's really sweating it out, she takes a bathroom break.