What's ahead for Alize Cornet? 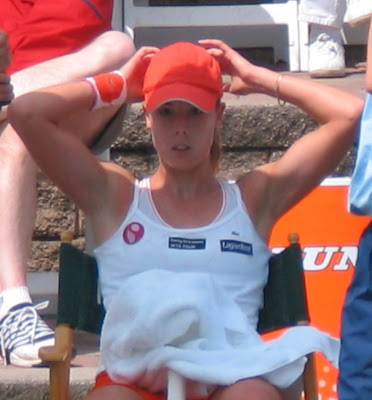 Yesterday, I talked about the tough draw Victoria Azarenka has in the early rounds of the French Open. But what about France's new clay star, Alize Cornet?

Cornet's draw is tricky, too. In the first round, she faces Julia Vakulenko. Under normal circumstances, that would be a test--perhaps a tough test--for Cornet, but Vakulenko has been dealing with a wrist injury for months, and has not played much. She is bound to be playing below her usual level.

So on to the second round, in which Cornet will play either Gisela Dulko or Sara Errani (my pick for most interesting first round match). Cornet struggled against the relentless Errani in Charleston, in a match that went on for a long time, was plagued by bad line-calling, and which gave me the impression that the opponents were eager to get away from each other. Errani recently defeated Agnes Szavay in Rome, handing her a bagel in the first set.

If Cornet winds up playing Dulko, she will also have her hands full. Dulko is an very fine clay player, who--like Patty Schnyder--has good serve days and bad serve days. Cornet had better hope she gets Dulko on a bad serve day. Dulko has a lot of court skills, hits much harder than her size would suggest, and lately, has demonstrated some terrific serving. On a good day, she will be a real threat to the young Frenchwoman.

Let's say that Cornet gets past Errani or Dulko. Her next round would most likely be against Agnieszka Radwanska, who just won the Istambul Cup. The two have never played each other, and a contest between them would be one worth watching. I cannot say who would win. However, should Cornet emerge victorious, her round of 16 match would be played against Jelena Jankovic (unless the talened Dominika Cibulkova pulls off a major third round upset).

I found a nice picture of Jankovic and Cornet -- you described the moment previously (thank you, because else I wouldn't have appreciated the moment as fully). You've probably seen it but if you scrapbook...

I'm unable to access your link (with Blogger, you can use TinyURL in these cases), but I have seen the photo to which I believe you are referring. It is on the tour website.