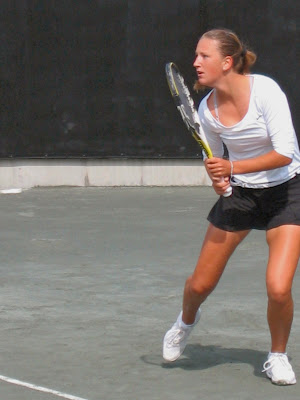 Victoria Azarenka has her work cut out for her at Roland Garros. She plays Edina Gallovits in the first round. Gallovits is ranked number 61 in the world, but her clay skills are nothing to sneeze at. In Charleston, she was very impressive. But assuming Azarenka gets past a tough Gallovits, her next probable opponent would be Sorana Cirstea. Cirstea is not having a good week--Agnieszka Radwanska defeated her 6-0, 6-0 in the second round in Istambul--but she is a solid player who can do well on clay (she took Anna Chakvetadze out of the Family Circle Cup in the second round).

Assuming Azarenka gets to the third round, her most likely opponent would be Francesca Schiavone, the Italian clay court veteran who can cause trouble for the best of them. And if Schiavone's tenacity, backhands and lobs don't do Azarenka in, standing across the net in the round of 16 will be none other than Svetlana Kuznetsova, provided there has not been a big upset (that would have to be pulled by Alisa Kleybanova because Nadia Petrova isn't going to do it).

Azarenka, by the way, is completely capable of beating all of these players. It's just that a seeded player does not usually have to work so hard in the early part of a major draw.
Posted by Diane at 9:12 PM