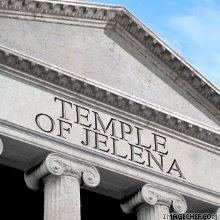 Defending champion Jelena Jankovic retained her title in Rome today by defeating Alize Cornet, 6-2, 6-2 in the final. Cornet had a lot of trouble with her serve. That is not usually the case with Cornet--in her first Tier I final, however, it appeared that nerves took over. Cornet had a 49 first serve percentage, a 48 first serve won percentage and a 13 second serve won percentage. She was broken seven times.

During the match, Cornet was obviously emotionally distraught. After the match, she said the problem was that--after going through qualifying and getting to the final--she was simply exhausted, and unable to play at her usual level. I thought Cornet played considerably below her potential in the semifinal, also, though certainly better than she played in the final. Nevertheless, she is a very talented young player, and we will be seeing a lot more of her.
Posted by Diane at 10:48 AM