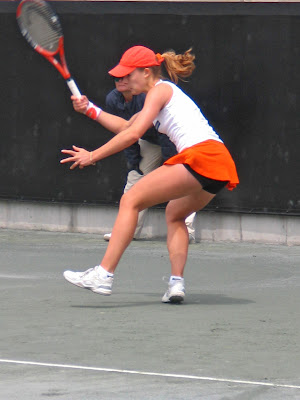 Alize Cornet, playing far from her best tennis, nevertheless earned a spot in tomorrow's Rome final by defeating Anna Chakvetadze, 3-6, 6-4, 6-3 today. Chakvetadze, who tended to be inconsistent (think Goolagong's occasional "walkabouts") even before she suffered a trauma at the end of 2007, has now become even more so. I happen to think the Russian is very talented, and I especially enjoy watching her work the court. However, she has a tendency to fade away during matches, and she faded just enough today for Cornet to win.

In the third set, Cornet received such a bad line call that I wanted to scream "Hawkeye for clay courts now!" but no one would have heard me. The chair umpire confirmed the bad line call, and Cornet, who is a bit of a hot-head to begin with, became quite upset. She had trouble letting go of the incident, but she eventually pulled herself together.

Cornet appeared sluggish today, and her forehand was shaky. The Frenchwoman will have to strengthen it and play her usual explosive game if she is to have a chance against her final opponent, defending champion Jelena Jankovic. Jankovic received a walkover from semifinal opponent Maria Sharapova, who sustained a calf strain while practicing. It probably didn't help that she did all that stretching--as opposed to sliding--in her quarterfinal match against Patty Schnyder (those two have great matches!).

Cornet, who will now enter the top twenty, made it to the semifinals in both Amelia Island and Charleston this year. This is her first Tier I final.
Posted by Diane at 5:30 PM