Why don't we skip the Roland Garros women's final and just give the trophy to Henin? 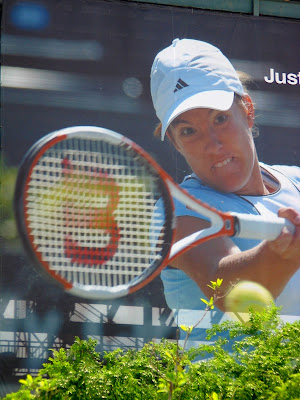 
The French Open is my favorite Grand Slam tournament, but the women's finals have been consistently bad now for several years. Today, first-time finalist Ana Ivanovic, after making a blockbuster start, fell victim to so much anxiety that 67% of the points made by her opponent came from Ivanovic's unforced errors. The women's ace leader throughout the tournament, Ivanovic did not serve any aces, and she had a 50% first serve success. "Deer in the headlights" would most accurately describe Ivanovic's reaction to being in her first Grand Slam final, and it was painful to watch her. Henin won, 6-1, 6-2.

But this is nothing new. In 2005, former French Open champion Mary Pierce, played brilliantly throughout the tournament--I thought her chances of winning a second title were huge--then went to pieces when she faced Henin in the final. The final score was 6-1, 6-1. Last year, Henin easily defeated Svetlana Kuznetsova in another boring final, and in 2003, she easily defeated her compatriot, Kim Clijsters. Henin was ill in 2004 and did not enter the tournament, so the task of delivering a poor-quality final went to Russians Anastasia Myskina and Elena Dementieva.

This is Henin's fourth Roland Garros title, and her third consecutive French Open title. The only other woman in the Open era to win three in a row was Monica Seles. The most French Open titles ever won by a woman was seven, achieved by Chris Evert, who could have won more than that.

What did you think of the commentators' focus on Henin's formerly estranged family members that were in the stand?
We had always heard the story of her mother taking her to Roland Garros when she was young but is this the new Henin human interest angle? I think it places the commentators in an awkward position actually. While they like such stories, Henin is so private that they don't really have the back story I am sure they would like.

I think they didn't need to go on and on and on about it. First of all, her father, depsite their reunion, chose not to come, and in her interview, Henin sounded hopeful for next year. Ever hopeful.

Henin split from her family years ago because her father told her to quit playing tennis and be the substitute "wife" when her mother died; that is, clean the house and cook the meals. She says her family also had no clue what it took for her to become the champion she is, and they apparently completely de-valued her achievements. I have heard her criticized for alienating her family, and it makes me want to scream. She left in order to have a life, rather than be their Cinderella.

I hope this isn't the case, but I have seen too many instances of ill-treated persons like Henin "reuniting" with a family because of being so desperate to have a family, but the family maybe hasn't really changed that much. I can't help myself--I also wonder whether money has anything to do with this.

A well-known misogynist sports writer recently wrote (just below a paragraph in which he criticized Henin for not wearing makeup at interviews) that Henin is a model feminist (I won't use his exact metaphor--it is too sickening) because she is so self-empowered...for example, she doesn't feel she has to wear make-up at interivews (I'm not making this up). I wonder if she is that self-empowered. She is driven, yes, but she has always struck me as especially fragile.

And, on the same subject, I am sick of commentators telling us whose family is "close"--like they know.