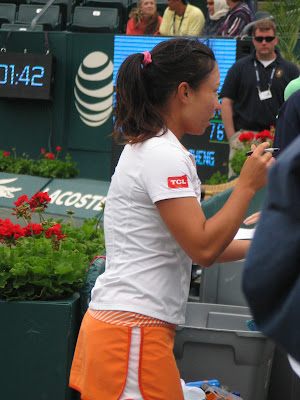 Also, doubles star (and she's no slouch in singles) Zheng Jie's ankle injury is bad enough that she will not play at Wimbledon, either. Also withdrawing is Romina Oprandi of Italy. The replacement players are Catalina Castano, Melinda Czink and Anna Smashnova (this will be Smashnova's last Wimbledon).

No word yet on whether Martina Hingis will be able to play in London; her hip has been bothering her a lot.

Some better news on the injury front: Vera Zvonareva's wrist injury, which she sustained in Charleston, is not as serious as previously thought. She will not have to have surgery, after all, and she could be back as early as August.
Posted by Diane at 11:25 PM