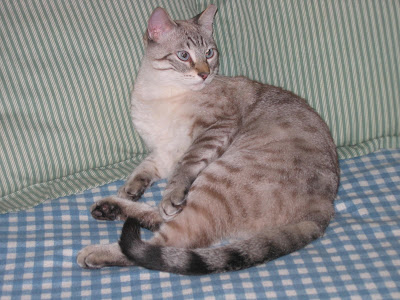 Last week, I introduced Roxie, and the week before, her sister, Velma. Roxie and Velma are almost four years old. During the past year, they have had to make an adjustment: Two kittens entered our household, both rescued from a feral colony (the sisters were rescues, too--from a yard in another city).

Pictured above is Ziggy Stardust, who was in love with the sisters from the day he arrived. It has taken him a while to win them over, but he is nothing if not relentless. Ziggy wants to play almost all the time, and he has an appetite like an oil rig worker's.
Posted by Diane at 10:09 AM

Lovely kitty. I had a very special female, Bandera, who looked like Ziggy. She was a bit lighter, but that same lynx Siamese type cat.

Thank you. We wish we knew the breakdown of his heritage, but all we know is some type of Siamese, and tabby. He has a sister who was also rescued from the colony, and she is living happily on a farm in another state.