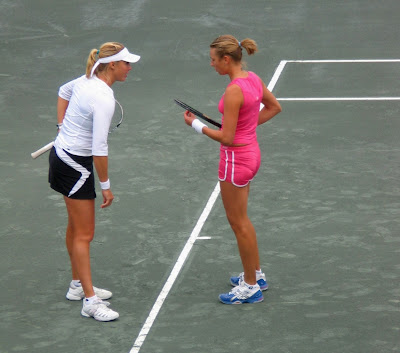 Molik (left) consults with Santangelo
Tonight in Paris, the 17th-seeded team in women's doubles, Alicia Molik and Mara Santangelo, won the French Open by defeating Katarina Srebotnik and Ai Sugiyama, 7-6, 6-4. In the semifinals, Srebotnik and Sugiyama had taken out number one seeds and defending champions Lisa Raymond and Sam Stosur, and Molik and Santangelo had beaten number two seeds Cara Black and Liezel Huber. Along the way, Molik and Santangelo had also taken out the hot team of Chan Yung-Jan and Chuang Chia-Jung. The number 3 seeds--winner of two Grand Slam titles--Yan Yi and Zheng Jie, went out in the first round.

Alicia Molik was a top-10 singles player until she had to drop out of the tour because of an inner ear infection. She has not since regained her singles status.

For many years, Ai Sugiyama was half of a very successful doubles team that included now-retired Kim Clijsters. Clijsters stopped playing doubles some time ago, however, and Sugiyama paired with Daniela Hantuchova. Her pairing with Srebotnik is new.
Posted by Diane at 3:32 PM