It's no secret that women's tennis isn't considered "real" tennis by a lot of people, just as women's basketball, football, you name it, isn't considered "real" when (irrationally) compared with men's sports. Commentators struggle to say the "right" things about female athletes because the right things simply do not come natural to them. Female athletes are put down in word and action every day. It's nothing new.

Wimbledon has a history of not showing respect to its female competitors, but--not to be outdone--the Australian Open is playing catch-up.

First, there's the matter of Vika Azarenka. Jeered and taunted by both the Australian press and Australian fans, she still managed to win the event two years in a row. Officials engraved the abbreviation for "Belgium" on her trophy instead of "Belarus." This year, on two occasions, the Bulgarian flag was painted next to her name on the court. There's always some new way, it seems, to show disrepect toward Azarenka.

There was also an obvious reluctance to showcase women in the night matches this year.

And then, there was the collusion between Tennis Australia and the Australia Open that allowed the former to call a press conference right in the middle of the second women's semifinal. This move wasn't just insulting to world number 1 Serena Williams and her opponent, Madison Keys, but to all women, and all who care about women.

And speaking of respect: See this? 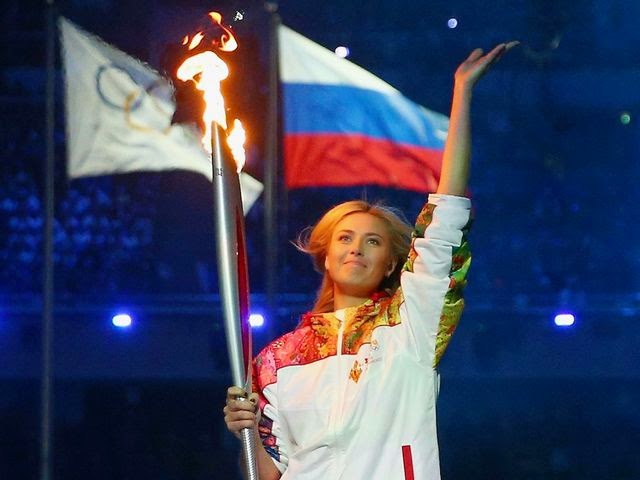 It means that Maria. Sharapova. Is. Russian.

And finally--still on the same subject, and you know who you are: Grow up. Look a woman in the eye and shake her hand.
Posted by Diane at 2:47 PM

The amount of disrespect sent Serena's way is also worth mentioning. The court assignments alone are disgraceful. The "hot babes" are always on the premier courts while the multi time champions are on secondary courts. As long as Women's tennis keeps promoting the hot babes over every one else they will get no respect.

Yeah, and even if they're using the "hot babes" theory (which is disgusting), there are a whole lot of people who think Serena is a hot babe.

what was said about maria being russian or not russian?

enjoyed the final-i think the two players enjoyed it too. maria likes a fight and serena has always says she likes players that really give it their all and fight against her.

Sunny, the Internet was once again filled this past week with declarations of Maria's non-Russianness. Every time she enters the sports news, the attacks come. I don't get it at all; I find it very offensive.