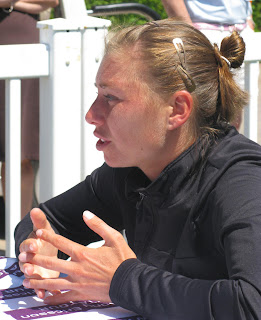 Vera Zvonareva, known for her command of windy conditions, put that command on display today in the Qatar Ladies Open final in Doha. Never wavering in the presence of top seed Caroline Wozniacki's relentless ball retrieval and accuracy, Zvonareva eventually wore Wozniacki down. Zvonareva broke Wozniacki four times to achieve a 6-4, 6-4 victory, her first tournament win since February of 2010.

Zvonareva, seeded 2nd at the tournament, was clearly delighted with her victory, and hit balls into the stands for an unusually long time. The Doha win was not easy. In the quarterfinals, the Russian had to play for over three hours and nine minutes to defeat Daniela Hantuchova, and in a very competitive semifinal match against Jelena Jankovic, she won a game in which she served at 4-all, 0-40 in the final set.

It's interesting bc I keep hearing the "Oh, Wozniacki was tired. It's been an exhausting couple of weeks for her." and yet once again, it is the opponent of the so-called tired player who had the more physical and emotional tournament.

The better player on a given day isn't always the one you think it's going to be.

In any case, they are both playing well, which is nice to see. Today was Vera's day and this us an important win for her.

Good point. They are both playing well, and it was also a good tournament for some other players.