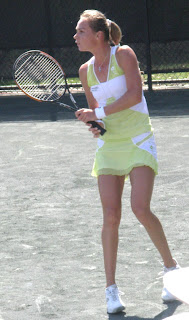 It was a pleasure to watch Magdalena Rybarikova dip into her considerable bag of tricks during the Memphis final tonight. What wasn't a pleasure was watching the match end after the first set. 6th seed Rebecca Marino, who suffered a left abdominal strain in the semifinals, just wasn't herself, and had to retire at 2-6 because of the pain. (Tennis Channel commentators said they didn't know anything about the injury. I did, as I'm sure many fans did. Business as usual with commentators.) It was too bad for Marino, for fans--and for Rybarikova.

The good part is that Rybarikova, having fallen out of the top 100, really needed this career boost. This is her second WTA Tour title: She won the Birmingham tournament in 2009.

Between them, Rybarikova and Marino hit 63 aces during the tournament, with Marino hitting 40 of those. Both women have really fine serves, and I look forward to watching both of them throughout the season.

I admit that I was wondering why she was missing so many backhands and forehands and moving so gingerly as I had forgotten about the ab strain that she had treatment for in the semis, but the commentators should have known and perhaps informed viewers of this. It was just a pathetic performance.

What was even worse is that when DelPo had a similar situation when he had an 18 minute service game, none of the commentators mentioned how lame it was that he was 40-0 up on his serve when he lost both that lead and his serve. Idiots.