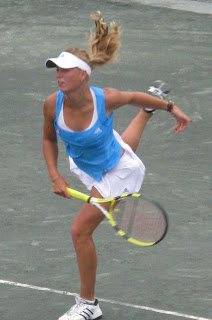 Top seed Caroline Wozniacki defeated Svetlana Kuznetsova 6-1, 6-3 today in the final of the Dubai Duty Free Tennis Championships. It wasn't until the latter part of the match, in fact, that Kuznetsova began to play in the form that has helped her win titles. For most of the match, she looked a bit sluggish, and she created a great number of unforced errors. Wozniacki, for her part, did not waver, getting back almost everything, and setting up some beautiful winning shots. She broke Kuznetsova's serve seven times.

This is Wozniacki's 13th WTA Tour title; tomorrow, she returns to the number 1 ranking position.