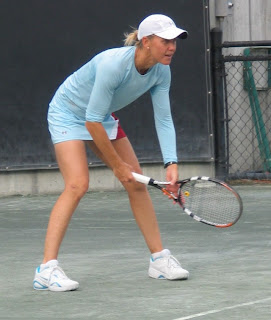 Rennae Stubbs, just shy of her 40th birthday, has retired from professional tennis. Stubbs, the longest-serving member of the Australian Fed Cup team, played her final match today in Hobart. She and Anastasia Rodionova lost to the Italian team of Sara Errani and Roberta Vinci in the Fed Cup World Group quarterfinals. After the match, there was a ceremony honoring Stubbs, and there was also a ceremony honoring her at this year's Australian Open.

A doubles specialist, Stubbs won the Wimbledon championship twice--in 2001 with Lisa Raymond, and in 2004 with Cara Black. She won the Australian Open championship in 2000 with Raymond, and the U.S. Open title in 2001, also with Raymond. Stubbs and Raymond were the French Open runners-up in 2002. Stubbs was also on the runner-up team (with Sam Stosur) at the Wimbledon championship in 2009, and at the U.S. Open (with Brenda Shultz-McCarthy) in 1995. She was nine times a semifinalist at major tournaments. In mixed doubles, Stubbs, playing with Jared Palmer, won the 2000 Australian Open; she and Todd Woodbridge won the U.S. Open title in 2001. 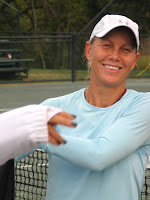 In 2001, Stubbs and Raymond won the WTA Championships. Stubbs is the holder of 60 WTA Tour titles, and enjoyed a number 1 ranking in doubles in 2000. Stubbs played for the Australian Fed Cup team for 17 years, and and retires with a 28-9 record in Fed Cup doubles play. Stubbs was also a member of the winning World Team Tennis team on four occasions, and in 2008, she was given the Female Most Valuable Player and the Finals Most Valuable Player awards.

Known for her colorful arguments with chair umpires, Stubbs has always spoken out when others were silent. When the no-ad, super-tiebreak rules were introduced to WTA Tour doubles play, it was Stubbs who led the outcry (to no avail) against the changes. For several years now, Stubbs has worked as a tennis broadcaster in Australia, and has done a very good job. Fortunately, we have much more to look forward to in that area, but the doubles courts just won't be the same without the sight of Rennae rushing to the net.
Posted by Diane at 4:03 PM

Will miss Stubbsy. Spoke truth to power many times.

It won't be the same without her. I knew she had to retire some time, but it feels strange to know she's really done it. I'll miss her, too.

In my view one and all must glance at this.