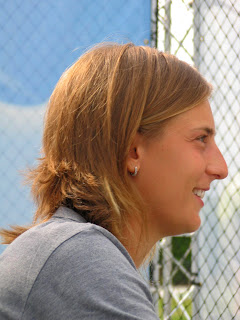 Mara Santangelo, who was born with a deformed foot but went on to achieve honors in professional tennis, retired today. Santangelo has played in only one tournament since the summer of 2009, and her foot pain has finally caused her to end her career. The Italian player always kept a low profile, despite the fact that her sports biography is another of those "the doctors said I'd never...." stories.

Santangelo was told she would never be able to play tennis at a high level. She won the Bangalore singles title in 2006, but she is much better known for her doubles play. She was the winner of nine doubles championships, including the 2007 French Open, which she won with partner Alicia Molik. Santangelo was also, at one time, a member of the Italian Fed Cup team. She reached the fourth round of the Australian Open in 2004 (losing to Justine Henin), and she won the 2009 European Beach Tennis Championships with Laura Olivieri.

Santangelo is currently managing Prince Le Restaurant in Porto Cervo, on Sardegna Island. The restaurant is part of Piazza del Principe, a commercial complex which Santangelo owns. She also works for the Italian Tennis Federation's television channel.
Posted by Diane at 8:35 PM