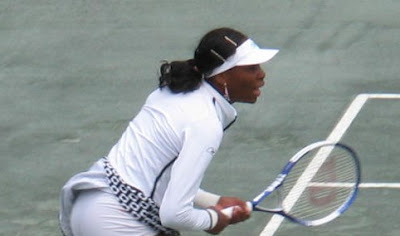 In a sometimes roller-coaster ride of a final, Venus Williams and Vera Zvonareva--both 4-0 coming into the match--provided some unusual sports entertainment in Doha today. This match had everything, including some things we could have done without.

In the first set, Williams' serve was obviously off, and Zvonareva's confidence was obviously high. But strange things happened. Serving for the first set at 5-2, Zvonareva was broken. Serving for it again at 5-4, 40-0, she saw two set points saved by Williams, after which Zvonareva had a dramatic, sure-thing volley to take the set. Her hand wavered, though, and the ball went into the net; all Zvonareva could do was smile. On her fourth set point, she hit a wild ball out wide. And then she was broken.

From down 2-5, Williams evened the match to 5-all. A tiebreak ensued, and Zvonareva found herself down 1-5. At that point, she turned on some special switch, and rolled on fabulously, with a final tiebreak score of 7-5.

But Zvonareva was barely there in the second set, and Williams' serve improved significantly. Williams also played this set with more of her characteristic aggression, and won it 6-0. My best guess is that Zvonareva was mentally exhausted after the thrills and chills of the first set.

The third set featured a dominant Williams, while Zvonareva continued having trouble holding her serve. When she finally held it, serving at 1-4, it was the first time she had held it since 5-6 in the first set. Zvonareva also broke Williams, and for a moment, it looked like the match might again be a real contest. But Williams would not let that happen. During one lost point, Zvonareva fell to the ground, a la Jankovic, in frustration. During the next one--when the writing was on the wall--she fell down again, this time crying and smashing her racquet. Zvonareva doesn't do that type of thing too much anymore, but if ever there were a time to do it, it was at that moment.

The first set of this match was must-see tennis, strange as it was. It was sad to see Zvonareva fade away, but even with that, she produced some terrific shots, and she had a wonderful week in Doha. She was also quite mentally tough most of the time. Williams had a wonderful week, too, playing very strong tennis, and recovering easily from the times when she struggled with her serve.

It is worth noting that, during the final, Serena Williams--once again--sat in the stands with a flat affect. I'm used to that, but I was a bit surprised that that flat affect was barely altered when her victorious sister came to the stands to greet her box after she won the title.