'Cause it makes me that much stronger...Makes me work a little bit harder... 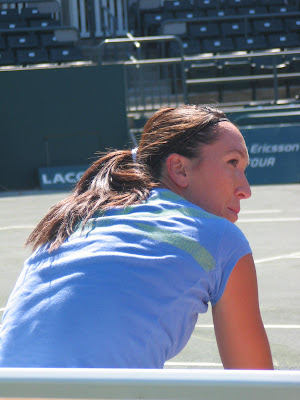 Fatigue, illness, injury, bad patch--whatever it is, it rarely keeps Jelena Jankovic from being a fighter! Tonight was no exception. Down 1-5 in the third set against Sofia Arvidsson, Jankovic broke her opponent twice to get to 5-all. Then it went to 6-all, and Jankovic found herself down 3-6 in the tiebreak.

She then saved five match points, and at 9-10, broke Arvidsson, and won the match on her second match point.

Credit to Arvidsson, who is having an excellent 2008 season, kind of out of nowhere.

Tennis Channel was supposed to have shown tennis for five hours tonight, but all they showed was the "live" Federer-Monfils match, and even that was a somewhat delayed broadcast.
Posted by Diane at 11:19 PM

did you manage to survive the momo vs peng thriller alright? I'm so glad that momo was able to come back fighting at the end...it could've so easily been 6-4 to pend in the third!

this will definately give her more confidence and lets hope this is the turning point for the season.

I wasn't "watching" that one as closely--I forget why--but I was quite relieved when I saw how it came out. I felt the same way--that this win might give Amelie some badly needed confidence.

Diane Elayne Dees is a writer, a retired psychotherapist, a former speech communication instructor, and a former public relations specialist. She is also a life-long fan of women's professional tennis.
For several years, Diane published the progressive blog, The Dees Diversion, and she also contributed regularly to the Mother Jones MoJo Blog. Diane has published political essays, short fiction and creative nonfiction. For the past several years, she has concentrated on writing poetry (Diane has written several tennis-themed poems).
Diane's poetry chapbook, Coronary Truth, is now available from Kelsay Books (and from Amazon).
Two other chapbooks, I Can’t Recall Exactly When I Died, and The Last Time I Saw You, are forthcoming. Her microchap, Beach Days, is available for download and folding at the Origami Poems Project site, and her latest microchap, Pandemic Times, is also available from the Origami Poems Project.