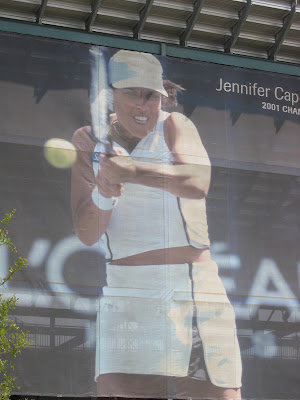 Chris Evert, Martina Navratilova, Arantxa Sanchez-Vicario, Rosie Casals, Conchita Martinez, , Mary Pierce, Jennifer Capriati, and Iva Majoli will all be on Daniel Island next month to celebrate the 35th anniversary of the Family Circle Cup. There will be a big opening ceremony hosted by Bud Collins on Tuesday, April 15, then, on Saturday, April 19, there will be a Parade of Champions featuring several former winners of the tournament. Some of those players will also be on hand beginning Thursday, April 17, for interviews and autograph sessions. On Saturday morning, fans will be served breakfast, and Bud Collins will interview some former champions.

Rosie Casals, better known as Rosebud, was the first Family Circle Cup champion. She won the title in 1973, defeating Nancy Richey in the final, and collecting the largest check ($30,000) ever given to a female tennis player. The final was also the first women's tennis match to be shown on NBC.
Posted by Diane at 8:21 PM