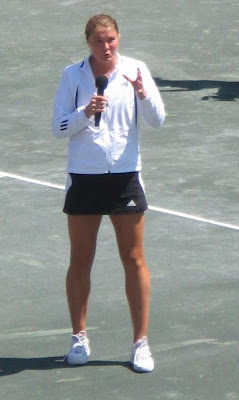 Dropping the first set, just as she did when she defeated both Justine Henin and Serena Williams, Dinara Safina won her first Tier I tournament today when she defeated Elena Dementieva, 3-6, 6-2, 6-2. Safina's victory in Berlin seemed almost inevitable, yet so many times, when a player performs superbly throughout a tournament, she winds down in the final against a tough opponent.

Dementieva is one of those tough opponents--one of the toughest--but Safina did the same thing with her that she did with her other opponents: She kept a cool head about her, figured out what to do to win, and then launched a successful two-set campaign.

Winning Berlin--especially the way she won it--places Safina in a whole new category of players. She is serving very well, hitting sharp, accurate groundstrokes, successfully neutralizing the deep, hard shots of powerful opponents, and using her doubles skills to be successful at the net. Most of all, though, she is playing as though she believes she is there to win. This was a most impressive victory for a most impressive champion.
Posted by Diane at 11:34 AM

great picture and report Diane...and the title has a Leonard Cohen song running in my head now...."First we take manhattan, then we take Berlin..." :)
cheers
Claire

I'd forgotten about that song! Well, who knows what Safina will take next?