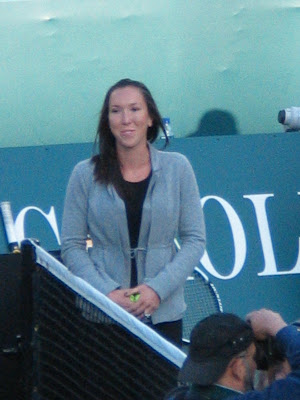 Will Jelena Jankovic defend her title?

Alize Cornet got an unexpectedly easy passage into the Internazionali BNL d'Italia semifinals when her opponent, Serena Williams, sustained a back injury during practice and gave the Frenchwoman a walkover. Anna Chakvetadze defeated a fatigue-ridden Tsvetana Pironkova, defending champion Jelena Jankovic took out Venus Williams, and Maria Sharapova turned up the volume in the third set and defeated Patty Schnyder.

I was disappointed to see Schnyder lose to Sharapova again, but the good part is that I don't have to endure two of my very favorites, Schnyder and Jankovic, competing against each other. I really hope Jankovic can defend her title, but I like all four players in the semis, and I will be pleased for anyone who wins. Of course, should Sharapova win, the French Open map changes a little.

In tomorrow's semifinals, Cornet will play Chakvetadze, and Sharapova will play Jankovic.