A little French Open history: the Queen of Clay 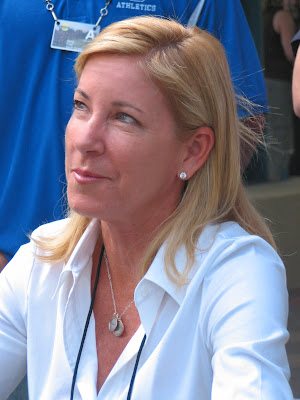 Tennis fans know that Chris Evert holds the greatest clay court record of all time--among women and men. Evert won 125 consecutive matches on clay, and she did it using a wooden racquet. Not everyone knows who broke her incredible streak, though. It was Tracy Austin, who defeated her 6-4, 2-6, 7-6 in the semifinals of the Italian Open in 1979. Evert did not lose another match on clay until the 1981 French Open, which means that during a 7-year period, she was 197-1 on clay courts.

Evert--who did not even play at Roland Garros in 1976, 1977 and 1978--won seven French Open titles, and there is no doubt she would have won at least one more had she played every year. I think three more is a more accurate guess, since she remained undefeated on clay and was number one in the world during that period.

I'm sure you've probably already read it, but the "The Rivals" bio about Evert and Navratilova's lives, and their friendship and rivalry, was a great read. :)

It's difficult to see too many of today's top-ranked players, Williams sisters aside, ever maintaining such a close relationship while competing against each other at the very top of the sport for so long.

I thoroughly enjoyed The Rivals and recommend it to anyone who likes tennis. There will never be such a rivalry again.