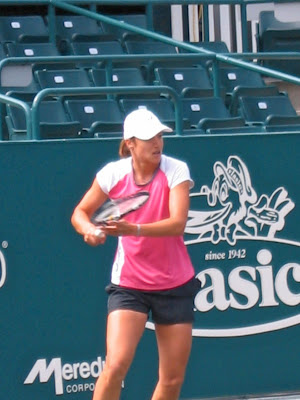 For fans of Katarina Srebotnik, it is not a shock that today, she triumphed over the woman many thought would win this year's French Open. Srebotnik is one of those players who has multiple skills, but usually not quite enough of them to get to the elite section of a major draw. A crack doubles player, Srebotnik can volley with the best of them, and generally gives top opponents a hard time. In Charleston, she lost to Serena Williams in three tight sets, and one got the impression that if she could get her game up just a notch, she could turn that scoreline around.

She did that today. According to Williams, Srebotnik played like a "top two" player in Paris. Srebotnik will now play the winner of the Emilie Loit-Patty Schnyder match. That sitation has bcome complicated, however, by Schnyder's foot pain, and there is talk that Schnyder may withdraw from the tournament (which would make some of us perfectly miserable).
Posted by Diane at 7:46 AM