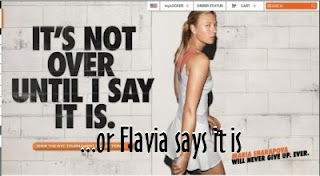 Flavia Pennetta's season wasn't too good after she injured her shoulder, but her performance at Wimbledon showed that she can still be fiercely competitive and quite creative on the court. Today, she brought her Queen of Fed Cup persona to Arthur Ashe Stadium and upset 3rd seed Maria Sharapova in the third round of the U.S. Open.

Sharapova made it easier for Pennetta. She made 60 unforced errors, and double-faulted twelve times.

Pennetta went up 4-0 in the first set, but Sharapova broke her, then broke her again, to even the score. But then the 3rd seed had an error-filled game that gave Pennetta an opportunity to serve for the first set; the Italian took it on her first set point.

The second set was, in many ways, a mirror image of the first: Sharapova won three straight games, but then there were four consecutive breaks. Sharapova served for the set at 5-3 after Pennetta double-faulted twice in a row. Sharapova then won the set on her first set point.

The third set lasted exactly an hour, and it began with tension. Sharapova had three break point chances, but Pennetta held. Pennetta then broke the 3rd seed, but it didn't look like she would consolidate that break. Again, however, the Italian saved three break points. This was classic Fed Cup Flavia, but across the net was one of the biggest fighters on the tour, and serious tennis observers knew there was more to come.

At 4-1, Pennetta got tight and lost her serve after she delivered a poorly-hit drop shot and followed it with a forehand error. Soon--and not surprisingly--it was 4-all. Serving at 4-5, however, Sharapova hit two consecutive double faults, and with Sharapova at 0-30, Pennetta hit a deadly forehand, then struck a backhand down the line to win the match 6-3, 3-6, 6-4.

Until today, Sharapova had won every three-set match she had played this season--twelve in all. Pennetta, seeded 26th at the tournament, has made it to the quarterfinals of the U.S. Open on two previous occasions. To get there again, she will have to defeat Peng Shuai, who won over Julia Goerges today.

Sharapova, who won the tournament in 2006, was upset in the third round the next year by Agnieszka Radwanska. She withdrew from the 2008 U.S. Open because of a shoulder injury, and in 2009, she was a third round victim of Melanie Oudin, who beat four notable Russians in a row. Sharapova made 60 unforced  errors in that match, also. Last year, Sharapova was defeated in the round of 16 by Caroline Wozniacki.

Sharapova's  rotator cuff injury was not diagnosed in a timely manner, and she played for some time with an injured shoulder. She then had to undergo rehab twice, and--since her return to the tour--her once outstanding first and second serves have become problematic for her. As the accuracy of her serve has declined, so, it appears, has her confidence during matches, and she is now much more prone to make unforced errors, especially with her forehand. Earlier this season, she made it to the Wimbledon final, but was beaten in straight sets by Petra Kvitova.
Posted by Diane at 9:49 PM

After too many yawn-inducing, straight-sets beatdown's... Ashe is finally treated to a compelling, competitive and dramatic match. Women's Grand Slam tennis at it's very finest - phew... I didn't know which way it was going to go right to the very end. Well done Flavia.

Hahaha! That jpeg is hilarious!

I like both Sharapova and Pennetta so was looking forward to this match. Boy! 60 unforced errors? As Serena once said about her own unforced errors "Yeah, that'll do it."

Pennetta played smart and strong. I agree with Wayne, it was a compelling, exciting match.

I enjoyed it, too--two big fighters.