Srebotnik's shoulder takes her out of singles competition 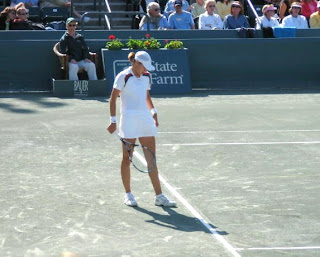 When an older player has sustained a significant and recurring injury, it is sometimes a wise decision to concentrate on doubles only--assuming the player has a decent doubles career. Nathalie Dechy did it, and was successful. Now Katarina Srebotnik is doing it, and--while fans will miss Srebotnik's singles play, just as we missed Dechy's--this is a decision Srebotnik has made regarding her health.

Srebotnik put Slovenia on the map in terms of women's tennis. She was ranked as high as number 20 (2008) in the world, and she is a fan favorite because of her athleticism, volleying skills, and playful, easygoing manner. In singles, she is especially remembered for her third round upset of Serena Williams at the 2008 French Open.

In the last few years, Srebotnik had to face some professional misfortune. She was out for most of 2009 after injuring her Achilles tendon. Her rehab was also unfortunate, in that she sustained another injury while trying to get stronger. When she finally returned to the tour in good health, her long-term relationship with her coach ended. Srebotnik began to focus on doubles, and it seemed very likely that she would make the decision that she announced last week--that she would end her singles career. This decision came about because of a recurring shoulder injury.

Tennis fans have plenty to look forward to, however. Srebotnik and her current doubles partner, Kveta Peschke, won Indian Wells this year, and made it to the final of the French Open. They also got to the semifinals of the WTA Championships.

Prior to teaming with Peschke, Srebotnik had success playing with a variety of partners, the most notable being Ai Sugiyama. Srebotnik holds 23 women's doubles titles, and four mixed doubles titles (three French Open and one U.S. Open). She also played in the finals of the U.S. Open, Wimbledon and The French Open (twice). Her highest doubles ranking, number 3 in the world, came in 2008. She is currently ranked number 6.
Posted by Diane at 11:46 AM

Wonder why more players don't do this. Srebotnik apparently loves tennis and the lifestyle enough to go into doubles full-time as she gets older and deals with injury. Other players, such as Mauresmo and Dementieva who are good doubles players could have done the same IF they liked the lifestyle of tennis and didn't have other things they wanted to do. Would the Williams sisters do this? If Kuznetsova keeps falling maybe she should go to doubles full-time. She played well with Navritalova back in the day.

I think a lot of players are just ready to retire. And both Mauresmo and Dementieva were at the very top, so when it was over, I think it was over. Srebotnik has always been known as a better doubles player, though she was no slouch as a singles player.