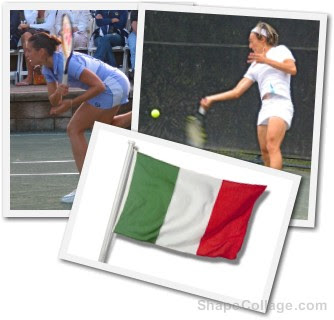 Italy won the 2009 Fed Cup today, and in doing so, became number 1 in the world in ITF rankings for the first time in history. The Italian team of Flavia Pennetta, Francesca Schiavone, Sara Errani, and Roberta Vinci defeated the USA 4-0 to take the title. Even more impressive--the Italians defeated Russia 4-1 to get to the final. Prior to that, they also took France out of the competition with a 5-0 score.

The fourth singles rubber was skipped, and the doubles match was played as a dead rubber. Italy won that, too, defeating Liezel Huber and Vania King 4-6, 6-3, 11-9.

To me, Schiavone and Pennetta are Fed Cup. There is nothing quite like the attitude they bring to every event, and Schiavone in particular captures the spirit of Fed Cup like no one else.

Some special Fed Cup awards were also presented today. Mary Joe Fernandez, USA Fed Cup captain, and Silvia Farina, who has the most Italian Fed Cup wins in history, were given the Fed Cup Award of Excellence today. The award is presented by the ITF Hall of Fame & Museum and the ITF.

On Thursday, Melanie Oudin was presented with the inaugural Fed Cup BNP Paribas Heart Award. The new award recognizes "a player who has represented her country with distinction, shown exceptional courage on court and demonstrated outstanding commitment to the team during Fed Cup by BNP Paribas." Oudin was selected by fans to be the first recipient. She was given a silver bracelet and $5,000 to donate to the cause of her choice. Oudin gave the money to Children's at Egleston, the hospital where her younger sister had open-heart surgery.
Posted by Diane at 1:32 PM

Congrats to Italy! way to go

Go Italy! I always knew there was more to Italy than tasty pastas and pizza :)

Congratulations to Italy! I especially like the fact that the Italian women always seem to make Fed Cup a priority. What a way to win...at home!

It was also nice seeing clay court tennis again after so long.

With all due respect to the US players who did take part, and the Italian players who beat them, it would seem that this was a case of no Williams sisters, no US victory in essence. Serena has been featuring in the British media in the last few days, over here to promote her book. Perhaps a pity that the competition seems to be resembling the Davis Cup in this respect. Katharine United Kingdom

It was going to be Italy's title, with or without Serena.

Cry me a river! Fed Cup a prioity? come on, many didn't want the sisters on the team. You can't have it both ways.