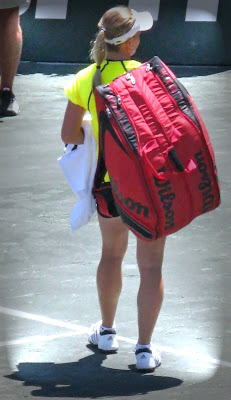 At the end of last year, I called 2008 a "strange" season. 2009, however, was just as strange, if not more so. The year did not lack drama; in fact, there was too much of it. The U.S. Open alone provided enough drama to fill an entire season, but there was even more to come after the last ball was struck in Flushing Meadows.

There was quite a bit of coming and going: Larry "I don't sell sex" Scott resigned as CEO of the tour, and was succeeded by Stacey Allaster. Justine Henin announced her return to the tour, and U.S. Open semifinalist Yanina Wickmayer was given a one-year suspension for violating an anti-doping rule.

The perennially popular Ai Sugiyama retired, after enjoying a long and excellent career, and Maria Sharapova made a shaky, but hopeful, return after being out for months with shoulder problems. Then there was Kimiko Date Krumm, who punctuated her comeback by winning the Korea Open the day before her 39th birthday.

Some of the tour's best players had significant problems this year. Former world number 1 Dinara Safina continued to go to pieces in major finals, losing both the Australian Open and French Open, and losing the former in a spectacular fashion. Jelena Jankovic finally got everything just about right, including the addition of a very respectable first serve, but--for various reasons--didn't get beyond the quarterfinals of a major event. Ana Ivanovic, who won the 2008 French Open, continued to slide down the rankings.

Some players did especially well this year. Flavia Pennetta became the first Italian woman in the Open era to enter the top 10. And Caroline Wozniacki moved to the elite top 5 in the world and was a finalist at the U.S. Open. Wozniacki, who probably entered too many tournaments this season, nevertheless played very smart tennis against a variety of opponents.

Sabine Lisicki, whose entire season was filled with injury and illness, nevertheless stunned the crowds in Charleston when she won the tournament as the 16th seed. Lisicki defeated Venus Williams, Marion Bartoli and Caroline Wozniacki. After last year's superb 35th anniversary tournament, fans might have expected a letdown in 2009, but Lisicki's out-of-nowhere victory added a fresh layer of excitement. Lisicki, despite her physical problems, would go on to advance to the quarterfinals of Wimbledon, but would then succumb to a bad case of match anxiety.

Also in 2009, some fans were able to watch more matches through the introduction of Tennis TV, the online service. I was able to see many matches I would not normally have been able to watch. At the same time, however, most of us lost the Wimbledon Live service, which was very disappointing. Both the U.S. Open and Tennis Channel sites offered several free online matches during the Open, which was a great addition.

Unfortunately, the general public may remember 2009 for the U.S. Open foot fault incident in which Serena Williams behaved in a menacing manner toward a line judge. Williams' failure to grasp the meaning of "apologize" was possibly topped by the behavior of both fans and members of the sports media, many of whom had not seen footage of the incident (including the foot fault). There was also a veritable festival of sexism and racism, directed equally at both Williams and the line judge. In short, a great number of people behaved in a disgusting manner, logic and reason went out the window, and narcissism and bigotry ruled.

And there was much more. Here are my own top 10 occurrences, in ascending order:

10. Shahar Peer is forbidden from playing in Dubai.
Dubai officials, fearing a fan boycott, denied a visa to Shahar Peer, who was entered in the Barclays Dubai Tennis Championships. There was no boycott by anyone on the tour, and unofficial tour spokeswoman Venus Williams was somehow hailed as "brave" for saying that there would be no boycott, sponsors were important, etc. The officials of Tennis Channel, who showed no spine at all when they retained the openly misogynistic Justin Gimelstob, suddenly developed one and refused to broadcast the tournament. That was an admirable move, but it was topped by defending ATP champion Andy Roddick's withdrawal from the tournament because of the Peer ban.

9. The Williams sisters win three major doubles titles.
Serena and Venus Williams, who do not play doubles very often, won three of the four major titles this year. The sisters won the Australian Open, Wimbledon and the U.S. Open. They have now won ten major doubles titles, as well as two Olympic gold medals in doubles. They also hold a career grand slam in doubles.

8. A new Spanish team becomes a major force in doubles.
Though they had played together now and then, Spaniards Nuria Llagostera Vives and Maria Jose Martinez Sanchez didn't become a committed team until this year. The next thing we knew, they were challenging the dominance of Black and Huber. Llagostera Vives and Martinez Sanchez won seven tournaments, including the Sony Ericsson Championships. To win that title, they defeated both the Williams sisters and Black and Huber.

7. Kuznetsova finally wins the French Open.
On paper, Svetlana Kuznetsova "should" have won the French Open long ago, but she was hampered by such details as a shaky mentality and Justine Henin. In 2009, though, she did it. Kuznetsova defeated then-world number 1 Dinara Safina to take her second major.

6. Dokic has a dream comeback run in Australia.
Jelena Dokic, one of Australia's "adopted daughters," had one of the most emotional runs I can recall at a major tournament. The former world number 4, off the tour for 3 1/2 years, received a wild card to the main draw of the Australian Open, and she used it to go all the way to the quarterfinals. Dokic, playing three sets each time, defeated Tamira Paszek, Anna Chakvetadze, Caroline Wozniacki, and Alisa Kleybanova. By the time she reached the quarterfinals, she was clearly exhausted, and lost to Dinara Safina. Neither woman played well, but Dokic--who had considerable chances--simply ran out of steam. The backstory involving the abuse Dokic had endured from her father, and her emotional recovery, added to the high emotion of this wonderful run.

5. 2009 U.S. Open--Oudin def. Russia
Nicknamed "Little Miss Upset," Melanie Oudin knocked out four tall and formidable Russians--Anastasia Pavlyuchenkova, U.S. Open Series winner Elena Dementieva, Maria Sharapova, and Nadia Petrova--in a row, to get to the U.S. Open quarterfinals. She did it the hard way, too, coming from behind over and over, and providing delectable thrills for fans both in Flushing Meadows and at home. Part of the excitement, of course, had to do with the fact that an American not named "Williams" was putting on such a great show. But there was more to it than that: Oudin is only five and a half feet tall, which--in pro tennis--is considered a major liability. And then there were those shoes, and that almost indomitable spirit. I say "almost" because when she played under the lights in the quarterfinals, Oudin finally caved to the pressure--and to a very clever Caroline Wozniacki. Still, it was a run that will never be forgotten.

4. Italy wins Fed Cup.
While I'm on the subject of defeating Russia, Oudin wasn't the only one who had a go at the Russian players. Italy, having defeated France 5-0 in the Fed Cup quarterfinals, enjoyed a 4-1 victory over the defending champions and dominant Fed Cup team. The Italian team then went on to defeat the USA 4-0 in the final, and to become the number 1 ranked country in the world. When it comes to Fed Cup, no one is more fun to watch than Flavia Pennetta and Francesca Schiavone. And the doubles team of Sara Errani and Roberta Vinci is top-notch, too.

3. Serena Williams wins 2 majors and the SEC.
After all these years, who is still winning the big titles? Serena, of course. This year, Williams won the Australian Open, Wimbledon and the Sony Ericsson Championships. She didn't win any other titles, which is interesting, but in the majors, she dominated.

2. Clijsters puts the "back!" in "comeback.
For so many years, Kim Clijsters struggled--usually against Justine Henin--to win major titles. Then she went away, had a baby, came back, and beat the likes of Marion Bartoli, Li Na, both Williams sisters, and a red-hot Caroline Wozniacki, to win her second U.S. Open. In a tournament already filled with drama of every sort, Clijsters' amazing comeback victory was a moment of very high drama, not just for tennis, but for all women's sports.

1. 2009 Wimbledon semifinals--Williams def. Dementieva, 6-7, 7-5, 8-6
"Instant classic" doesn't begin to describe the 2-hour-and-49-minute extravaganza that was the Serena Williams-Elena Dementieva Wimbledon semifinal. The longest women's semifinal in Wimbledon history, this match had just about everything--brilliant shot-making, big serving, constant changes of momentum, significant netcord points, and some tense challenges. There was a hardly a moment that didn't provide precision, artistry, excitement--or all three. Each woman elevated her game to such an extent that almost every groundstroke or volley seemed more important than the last. Williams would go on to defeat her sister, the defending champion, and win the tournament.
Posted by Diane at 4:18 PM

I have only just discovered your blog as well as your previous blog about Mis Deeds or something like that. Just wanted to say that I am enjoying every minute of it. Please do not take down your previous blog entries as I am finding them quite interesting. I dont agree with a lot of your views particularly those on tennis, but I respect your point of view. It is good to find a blog on the internet that is devoted to women's tennis. Thank you.

It was The Dees Diversion that I published for about five years.

I think the last year has been a blast! For me though the Williams Sisters have been the most entertaining to watch and see succeed.

I love this blog. Nice year end review. Predictions for next year? :-)

I generally don't do predictions because of a fear of getting my desires confused with my objective observations--and also because the tour is just so unpredictable.