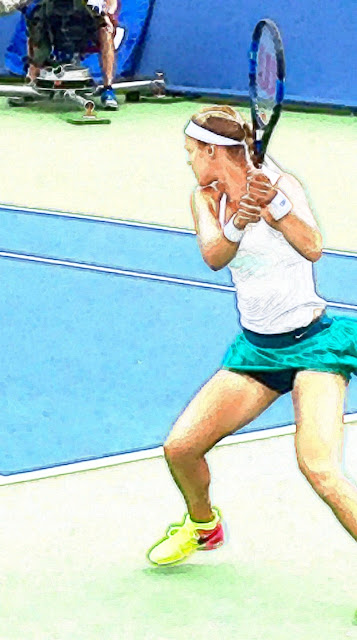 She of the beautiful backhand and the slumping career gave us a big exhale Sunday when she won the Claro Open Colsanitas in Bogota. But the final, in which Anna Karolina Schmiedlova played against 2012 champion and 5th seed Laura Arruabarrena, also featured some of the Schmiedlova roller coaster play we've seen all too much of in the last few years.

At the trophy ceremony, speaking of her coach, Schmiedy said: "He was with me in the bad times, now he's with me in the better times." Obviously, it was a very emotional moment for both of them.


Her recovery wasn’t too speedy
The pathway was rocky and weedy
The backhand is still flashy
(The  forehand’s not too trashy)
Congrats to our resolute Schmiedy!
— Diane Elayne Dees (@WomenWhoServe) April 15, 2018


In 2015, Schmiedlova played in three finals--all against Italians--and won two of them. She lost to Sara Errani in Rio de janeiro, and defeated Errani in the Bucharest final. She also won in Katowice, defeating Camila Giorgi in the final. Schmiedlova entered the top 30 that year, becoming number 26 in the world. Her competency on clay, as well as her amazing backhand, looked like a combination that could take her far.

But when the slump came, it was a huge one. In 2016, she lost 16 consecutive WTA matches, and her ranking dropped to 227. The next year, it rose to 133. That was a big improvement, but it wasn't a ranking that reflected Schmiedlova's talent.

But she kept at it, looking better--sometimes only a little bit better--each month, grinding her way through challengers and winning them, and this past week, she proved that--on some level--she never lost belief in herself. Tennis is a very mental affair (as are all sports, but tennis is an especially cerebral--and isolating--game), and belief has to exist. Sometimes--as in all of life--someone else has to hold the belief for us for a while, but eventually, we have to hold it ourselves, or everything falls apart.

It didn't all fall apart for Schmiedy. None of us can know what she went through, but it had to have been very difficult to go from being one of the most promising players on the tour to not being able to win a match. But this weekend, in Bogota, she found her way again. That's something that can inspire us all.
Posted by Diane at 9:40 PM

I've fallen, but I got back up.

Yes, a story of perseverance. Has to make this win so much sweeter.

I saw on her WTA profile that she’s a painter and photographer. Somehow, this doesn’t surprise me; there’s something kind of “inward” about her.