Rained out at 4-all, Goerges and Sevastova resume semifinal play today 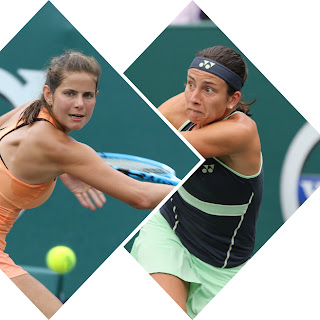 It isn't easy, for players or spectators, to have a match stop two-thirds into the first set, but it does happen, and it happened today in Charleston when the rain came during the Volvo Car Open's first singles semifinal match.

Julia Goerges and Anastasija Sevastova were locked at 4-all after Goerges caught up from a slow start to the match. All play for the day was eventually suspended, so the match will resume this afternoon.

This is the first time that either player has reached the semifinals of the event.

The other semifinal, which will be played this morning, features Madison Keys and Kiki Bertens. Bertens sustained a hip injury in her Friday night quarterfinal, so the delay in play could be helpful to her. Keys was a finalist in 2015, when Angie Kerber won the tournament.