Kiki or Julia? Volvo Car Open final is coming up 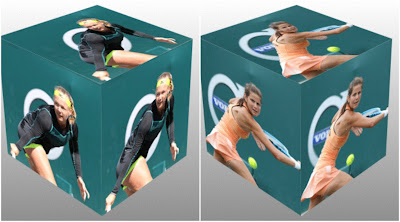 A bit later today, 12th seed Kiki Bertens of Netherlands will compete against 5th seed Julia Goerges of Germany for the singles championship of the 2018 Volvo Car Open.

It's a tough day for both competitors. Bertens' hip locked on her during her match on Thursday. Fortunately, a good pull from the trainer put her back on the court in pretty good shape. Yesterday, she and Goerges were at 4-all in the first set of their semifinal when the bad weather came; eventually, all play was canceled for the day. This may have worked in Bertens' favor because it gave her another day to work on injury recovery.

The Dutchwoman was on the schedule first today, and she defeated 7th seed Madison Keys in a real seesaw match in which Bertens held two match points in the second set. But she was unable to convert them. Keys held two match points in the third set, but also failed to convert them. The two-hour and 42-minute match was a toss-up right until the last moment, when Bertens won the third set tiebreak. Her 6-4, 6-7, 7-6 victory put her into the biggest final of her career.

It should be noted, however, that the 12th seed was somewhat bothered by her hip during this match.

Goerges, for her part, defeated 8th seed Anastasija Sevastova 7-6, 6-3 in today's delayed semifinal. Aside from struggling in her second round match against Kristie Ahn, the German has been spot-on throughout her campaign in Charleston. Goerges is attempting to become the fifth German to win the tournament; past winners were Steffi Graf, Sabine Lisicki, Andrea Petkovic, and Angie Kerber.

This is the first time since Lisicki's victory in 2009 that two western Europeans have vied for the championship.
Posted by Diane at 3:27 PM