If they're in Flushing Meadows....

....there must be a hurricane coming.

Greetings to all from Birmingham, Alabama. Birmingham is one of my favorite cities, but I'm not here for the great art and the great restaurants--I'm here because you-know-what is about to hit you-know-where. After watching much of the Open in hotel rooms during Katrina and Gustav, I now associate the tournament with rain, wind and misery. And here I am, once more, in a hotel room, but with no Tennis Channel and no ESPN2 (no kidding--ESPN2 is not functioning throughout the entire hotel). The television channels are supposed to be re-set in the morning, and I have live streaming--if there aren't too many guests using the wireless connection. Worst case scenario: I spend a lot of time in the lobby.

Being from Louisiana, I've done many hurricane evacuations. Today, I decided to make a fashion statement on my way out, and what better way to represent the insanity of an approaching hurricane than to honor Queen Chaos? 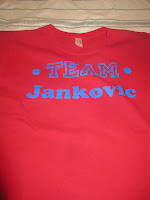 I did get to see some of day 1, before we left the state. I wasn't surprised by the Lisicki upset. Both Sabine Lisicki and Sorana Cirstea can come apart mentally, but Cirstea kind of likes to pull these upsets at big events. The German player won the first set, but after a rain delay, the momentum changed dramatically; Lisicki gave Cirstea her championship point with a double fault.

Lisicki, of course, wasn't the only German seed to depart. Julia Goerges was defeated in straight sets by qualifier Kristyna Pliskova. And Andrea Petkovic, who just recently returned from a very long injury layoff, also went out in the first round. Angelique Kerber, Germany's top player, who will play Anne Keothavong tomorrow.

Great shirt! I hope it comes in other colors that "match" whatever particular natural disaster might inspire its donning. You wouldn't want to get caught wearing your "tornado JJ shirt" when the "blizzard JJ shirt" is more appropriate, after all. ;)

I just hope I never need the Earthquake Shirt.

See, that's what I needed when that thing shook me in my seat last year. If I'd known that JJ was experiencing the same thing (though to a lesser extent, since I was closer to the epicenter) on court at that very moment, it would have been comforting in a weird way. ;)

The shirt is great. Hope everything is going ok and that you can watch the open as a distraction.

The US Open site is streaming most of the matches.

Thanks, Sunny and Anon. All is better now. I just hope we have power and cable when we get back.