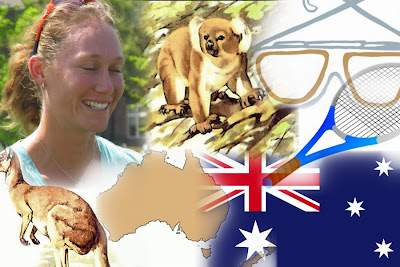 Samantha Stosur is the recipient of Australia's inaugural Newcome Medal, presented last at the Australian Tennis Awards. The medal is cast in white gold and features John Newcombe's signature. The other three finalists for the new award were Lleyton Hewitt, Anastasia Rodionova and Jarmilla Groth.

Newcombe also said that Stosur needs to come to the net more, and  that she needs to develop a slice serve. He noted that both her mentality and her physical fitness have improved, and that she has made some needed technical adjustments to her game.

Stosur, who won this year's Family Circle Cup and was a finalist at the 2010 French Open, is currently ranked number 6 in the world.

Newcombe is a former ATP world number 1. He won six majors in singles, seventeen in doubles, and one in mixed doubles. He is a former member and captain of Australia's Davis Cup team.
Posted by Diane at 8:56 AM