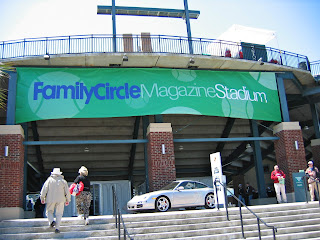 We're leaving Friday morning for Charleston--Mount Pleasant, to be exact--and will go to Daniel Island Saturday to watch Family Circle Cup qualifying. As always, if you have any questions about the tournament, feel free to ask them by commenting on this post or any other Family Circle Cup post. Last year, I was deluged with questions and requests, and I think I was able to answer all of them, or at least acknowledge them.

As readers of this blog know, I am disappointed that Arantxa Sanchez Vicario's Barcelona tournament has siphoned off several regulars from the Family Circle Cup. There are no Italian players and no Spanish players in Charleston this year, which is quite distressing. I hope their abence is temporary.

Last year's Family Circle Cup star, Alize Cornet, is going to Barcelona. Dinara Safina and Jelena Jankovic, also Charleston regulars, are not going to Barcelona or Charleston this year. Katarina Srebotnik, a Charleston favorite, is still injured. Agnieszka Radwanska and Agnes Szavay both played in Charleston last year, but neither is entered this year. And Victoria Azarenka and Jelena Dokic have withdrawn. One expects to be disappointed by last-minute withdrawals every year, but these withdrawals are especially disappointing because of the Barcelona issue.

But enough of the bad news. Those who are competing in Charleston include both Williams sisters, Vera Zvonareva, Elena Dementieva, Nadia Petrova, Caroline Wozniacki, Charleston favorite Patty Schnyder, Marion Bartoli, and Dominika Cibulkova. Not bad. Also appearing will be Sania Mirza, the Bondarenko sisters (back after a two-year absence), Virginie Razzano (also back after a two-year absence), Bethanie Mattek-Sands, Peng Shuai, Elena Vesnina, Sabine Lisicki, and Tamira Paszek.

The Family Circle Cup is a joy to attend. It is extremely well organized, the facility itself is very nice, and the staff could not be more helpful. The tournament announcer even pronounces the players' names correctly. There is also a lot of access to players, and the atmosphere is relaxed and cordial. The last two years have been especially great for me. In 2007, Jelena Jankovic won the tournament, which made me quite happy, and last year was the 35th anniversary extravaganza--hosted by Bud Collins--which was a wonderful experience, and included interaction with several former champions.

The history of the Family Circle Cup is an important one for women's tennis. It was the first women's tournament ever shown on television, and the prize for the first champion (Rosie Casals) was the largest ever given to a female player.
Posted by Diane at 12:03 PM

Diane, I'm sorry to say I recieved a compeletely identical comment lastnight to the one you have above, but from someone called 'Ruth'.

Because the comment was non specific and linked to a site called laptop bag dot info I deleted.

Anyway, all I really wanted to say is, have a great time in Charleston.

PS. Just copy and paste the above text into Goggle and you'll see what I mean. These Spam Monkeys are getting more crafty.

I though it might be spam, but gave her the benefit of the doubt. There has been a lot of spam lately, including some from someone representing a cause I really care about--but that doesn't make it any less rude.