Some final thoughts on Charleston

The Family Circle Cup has long been known as a "star-maker" and "breakout" tournament, and it seems only natural that Andrea Petkovic would firmly emphasize her comeback by winning it. The event also showcased the considerable talent of Genie Bouchard, as well as some lesser known, but exciting, young players who have lots of potential. I thought it was a real treat that Jana Cepelova, Elina Svitolina and Belinda Bencic were all there, and they all did quite well.

Cepelova won our hearts with her "all by myself" independent spirit. Her box was empty, she had no coach for most of the tournament, and she had no other staff or family or friends there. Some of us wanted to "adopt" her, or at least take her out for a good meal. I'm not sure Jana understood what the fuss was about; she was just there to play tennis! I imagined her sending a text message home: Tired & starving, FCC staff bringing me plate of food 4 dinner, beat Serena W 2day, need 2 get some rest

The Charleston event features a relaxed atmosphere, and the players always get really special treatment from the staff and volunteers (Charleston volunteers are great!). They also enjoy dining out in the city and frequently mention that the food in Charleston is one of their favorite things about the tournament. This year, the weather was superb--it was unbelievable that the rain completely missed the stadium on the final Sunday.


This year, I left Daniel Island with some lasting images (many of which, yes, do involve JJ) of the event, which I'll share here:

Petko publicly telling her team, regarding her behavior: "I'm sorry for everything."

Question: "...did you know that Fila calls that color 'Diva Pink'?"
Jelena Jankovic: "Yeah, of course, because I'm a diva. What else do you expect?"

Sara Errani, standing with her face mashed against the glass outside the media building, wondering if she was supposed to come in and do a press conference after her opponent retired in the second set

Errani with her hand over her face, shaking her head over and over as she was driven from the stadium in the golf cart after being upset by Belinda Bencic

Both finalists saying they didn't want or need
on-court coaching 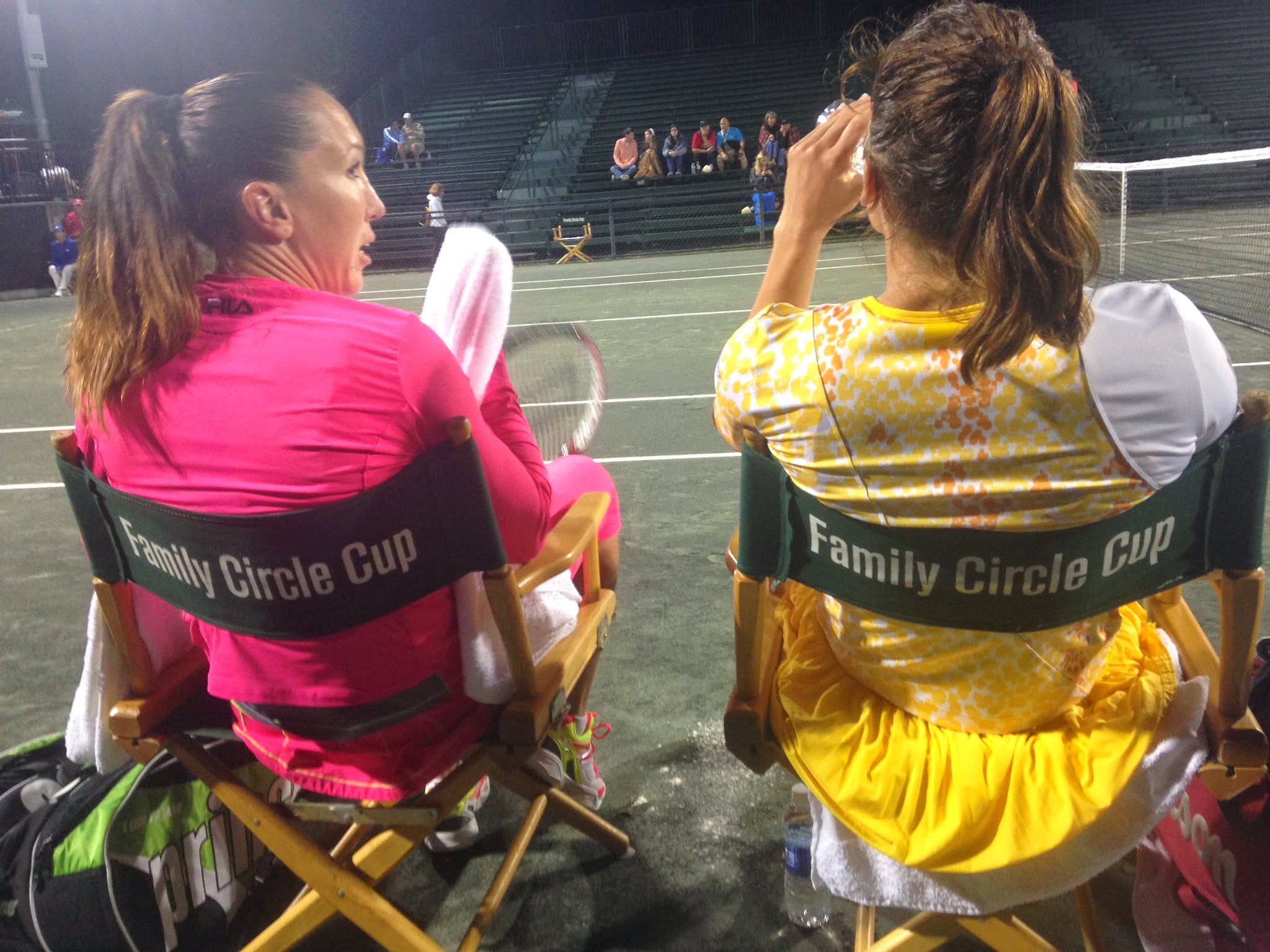 Sitting with other press directly behind JJ and Petko at their second doubles match, when Jankovic turned around and said to us, "What's wrong with her? Do something to pump her up!"

The Petko superfan who yelled loudly, "Hit it, AP!" or just "AP!" throughout Andrea's semifinal and during the final. At one point in the final, she yelled "What's wrong with you, girl?!"

Petkovic, taking Asderaki's hand in both of hers instead of shaking it when she won the final

Pam Shriver doing the Petko Chair Dance on ESPN (WTA Backspin has the video with instruction from You-Know-Who, about halfway down the page, on how to do the Petkorazzi Dance)

Jankovic explaining her new au naturel look: "Here I want to look like a beast. I just want to look as scary as possible. I don't want to look pretty and all nice and dolled up. For what? I'm going to get dirty and sweaty. The only thing, my hair has to be slick. That's the only thing."

Glad you enjoyed it, Bill. Charleston is always such fun.