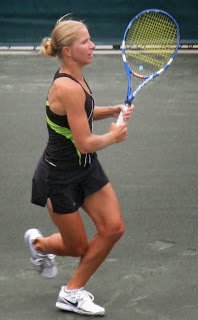 Veteran of veterans Jill Craybas has announced her retirement from professional tennis; the U.S. Open was her last event.

Craybas, always popular with U.S. fans because of her easy-going personality and hard work on the court, began her professional tennis career 16 years ago. She was in the top 100 for 10 straight years, and she reached a career high ranking of 39 in 2006, and a career high doubles ranking of 41 in 2008.

The 39-year-old Craybas (born on the 4th of July) graduated from the University of Florida, and was the NCAA singles champion in 1996.

Craybas reached the round of 16 at Wimbledon in 2005, and on her way there, she took out Serena Williams; the next year, she beat Kim Clijsters in Miami. Craybas also had victories over Elena Dementieva, Vera Zvonareva and a half dozen other top 20 players.

Jill Craybas was the first tennis player to get a sponsorship from Under Armour, and the company outfitted her before it officially manufactured and sold women's clothing.

In announcing her retirement, Craybas said:

"I tried to put the wins and losses into perspective and I hope I handled the ups and downs they provided with equal grace. I have truly cherished my years on the tour as they have taught me so much and encouraged me to grow into a unique, determined individual."
Posted by Diane at 10:24 AM