JJ's in Cincinnati--let the drama begin! 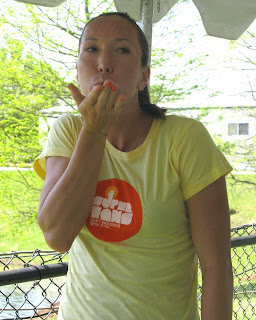 What could be more fun that watching former Cincinnati champion Jelena Jankovic and Francesca Schiavone (except that one of them has to lose)? During much of tonight's match in Cincinnati, they didn't look like they were having much fun. Jankovic dominated Schiavone throughout the first set, winning it 6-3, and for a while, it looked like she would dominate in the second set. But Schiavone, who is as good as they come at getting herself out of trouble on the court, began to move forward more, and it is forward movement that has created so much of her success. She broke Jankovic when she served for the match at 5-4, then broke her again when Jankovic double-faulted twice in one game.

Jankovic called for the trainer at the end of the second set, and had her thigh worked on. At 1-all in the third set, Schiavone played a sloppy game and was broken. She was broken again in the fifth game and asked to see her coach. Twice, Schiavone grabbed the front of his shirt and talked in a very animated fashion. She was broken again, and went down 1-5, but then she broke when Jankovic served for the match again.

By this time, the crowd was totally into the match. Schiavone moved Jankovic all over the court, and Jankovic was able to show off a lot of her signature movement in response. With a break point against her, Jankovic ran across the court, leaned over, and scooped up a backhand that sailed across the court and landed just inside the line. Even she was impressed.

Jankovic's tennis was all over the place in this match, and she was broken yet again. When Schiavone held for 4-5, the tension was palpable. The Italian player was making multiple errors (as was Jankovic), but she was also rushing the net and hitting some beautiful shots. Jankovic did hold at 5-4, and won the match 6-4, 5-7, 6-4. She then fell supine onto the court and kicked her legs up in the air. It was a fitting end to the dramatic two-hour and 38-minute event.

You could call this match a train wreck, but you could also call it a highly entertaining affair. Both players were upset with their coaches and with the chair umpire. There was yelling and staring and muttering and smiling. ESPN commentators referred to Jankovic's medical time-out as "spa treatment" as she lay with her head on her racquet bag and drank water while chatting with the trainer. But that's just JJ.

Ricardo Sanchez is back as Jankovic's coach, and it was good to see him in the stands. Darren Cahill described Sanchez's return as comparable to "entering a lions' den," but if anyone seems well-matched with JJ, it's Sanchez. Be sure to check out Bobby Chintapalli's great article on Jankovic, who recently talked with Chintapalli about everything from her distaste for practice to the problems currently faced by Caroline Wozniacki.
Posted by Diane at 10:54 PM

A night of high drama indeed, the packed crowd on Grandstand was loving it. Chair umpire Eva Asderaki particularly prominent throughout proceedings. Some additional highlights:
JJ complaining to EA throughout about the ventilators blowing too hard, EA "demanding" immediate response from Jankovic for challenges, Fran rowing with her coach - rowing with the umpire, JJs "spa" injury time-out massage, about to serve for the match Jelena complains to Azderaki the "same song" coming on during the change overs, and then promptly loses the set. Oh yes.... there was some tennis in there somewhere.

Thanks, Wayne. It just isn't the WTA with JJ!

I wonder if this will be her breakout Slam...